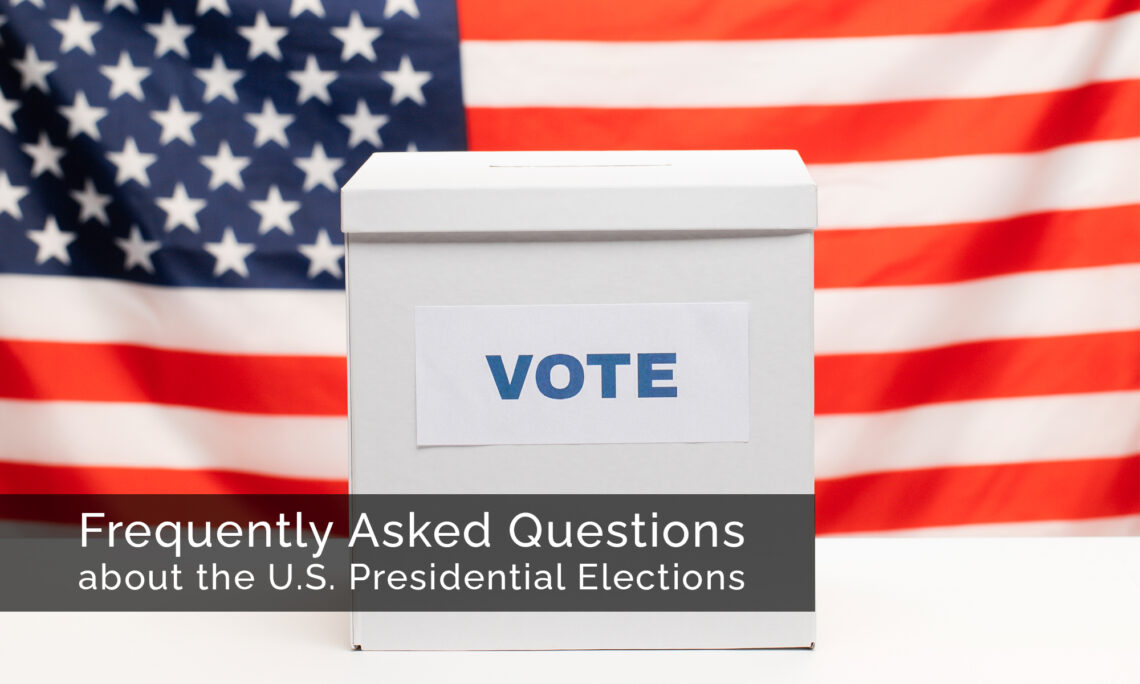 The U.S. Presidential Elections can be confusing. We’re here to answer some of the most frequently asked questions about the elections and the process.

Why do elections matter?

Free and fair elections are the cornerstone of democracy. Elections give citizens a voice in their government in the most fundamental way: by deciding who governs.

Elections help ensure that power passes in a peaceful, orderly manner from citizens to their elected representatives—and from one elected official to his or her successor.

The American system can appear complicated, but it ensures that voters have a voice at all levels of government.

The U.S. Constitution gives certain powers to the national (or “federal”) government and reserves others for the individual states and the people. The Constitution requires that each state have a republican form of government, in which people exercise their power through elected representatives, and it forbids states from violating certain specified rights, but states otherwise retain considerable power.

Why does the United States have only two major parties?

The drafters of the U.S. Constitution did not envision political parties; but as voting rights broadened and the nation expanded westward, political parties emerged. Today, the Republican and Democratic parties dominate the political process—both of them heirs to predecessor parties from the 18th and 19th centuries.

With rare exceptions, members of the two major parties control the presidency, the Congress, the governorships, and the state legislatures. Every president since 1852 has been either a Republican or a Democrat.

The donkey and elephant have been the symbols of the Democrats and the Republicans since the 19th century.

Why aren’t there more small parties?
The U.S. system employs the “first past the post” principle, which means a party can win a seat only if its candidate gets the most votes, even if they receive less than a majority of the votes cast. That makes it difficult for small political parties to win elections.

The U.S. Constitution guarantees that U.S. citizens over the age of 18 can vote in federal (national), state, and local elections.

To register, voters must meet the residency requirements of their states, which vary, and comply with voter-registration deadlines.

Who can run for political office?

To serve as president, one must:

Which public officials are elected?

The U.S. Constitution sets the requirements for holding federal office, but each of the 50 states has its own constitution and its own rules for state offices.

State and Local Level
Governors in most states serve four-year terms, but in other states the governor is elected for only two years. Voters in some states elect judges, while in others judges are appointed to office. States and localities elect thousands of public officials— from governors and state legislators to school board members and even dogcatchers.

What types of elections are held in the United States?

A general election is an election held to choose among candidates nominated in a primary (or by convention, caucus or petition) for federal, state and/or local office. The purpose of a general election is to make a final choice among the various candidates who have been nominated by parties or who are running as independents (not affiliated with a major political party) or, in some cases, write-in candidates. Measures such as proposed legislation (referendums), bond issues (approving the borrowing of money for public projects) and other mandates on government also can be placed on the ballot.

In addition, many states provide for special elections, which can be called at any time, to serve a specific purpose, such as filling an unexpected vacancy in an elected office.

When are elections held?

Elections for federal office are held in even-numbered years and take place on the Tuesday after the first Monday in November.

The presidential election is held every four years. So, the 2020 general election will be held on November 3.

Election for all 435 seats in the U.S. House of Representatives is held every two years.

U.S. senators serve six-year terms that are staggered so that one-third (or one-third plus one) of the 100 senate seats come up for election every two years.

If a senator dies or becomes incapacitated while in office, some states will hold a special election to fill the seat. The newly elected senator serves until the end of the original senator’s term. Some state legislatures empower the state’s governor to appoint a replacement to complete the term or to hold office until a special election can take place.

Most U.S. governors serve four-year terms except those in New Hampshire and Vermont, who serve two-year terms.

When are primary elections held?

State and local governments determine the dates on which primary elections or caucuses are held. These dates, and the amount of time between a primary and general election, significantly influence how early candidates begin campaigning and the choices they make about how and when campaign funds are spent.

In the run-up to presidential elections, victories in primaries held very early in the election year, such as that in New Hampshire, can influence the outcome of later state primaries.

What are midterm elections?

Midterm elections refers to elections of U.S. representatives, U.S. senators, and state governors that occur at the midpoint of a U.S. president’s term of office.

Why are general elections held on the Tuesday after the first Monday in November?

For much of U.S. history, America was a predominantly agrarian society. Lawmakers considered their convenience when choosing a November date for elections – after harvest time but before winter weather made travel difficult – as the easiest month for farmers and rural workers to go to the polls.

Because many rural residents lived a significant distance from the polls, Tuesday, rather than Monday, was selected to allow those who attended Sunday church services to begin travel after worship and still reach their destinations in time to cast their votes.

Lawmakers wanted to prevent Election Day from falling on the first of November for two reasons. First, November 1 is All Saints Day, a day on which Roman Catholics are obligated to attend Mass. Also, merchants typically balanced the accounts from the preceding month on the first of each month.

Has any president been elected without a majority of the popular vote?

There have been 18 presidential elections in which the winner did not receive a majority of the popular vote cast. The first of these was John Quincy Adams in the election of 1824, and the most recent was Donald Trump in 2016.

The founders of the nation devised the Electoral College system as part of their plan to share power between the states and the national government. Under the federal system adopted in the U.S. Constitution, the nationwide popular vote has no legal significance. As a result, it is possible that the electoral votes awarded on the basis of state elections could produce a different result than the nationwide popular vote. Nevertheless, the individual citizen’s vote is important to the outcome of each election.

How many times can a person be president?

In 1951, the 22nd Amendment to the U.S. Constitution was ratified, which prohibits anyone from being elected president of the United States more than twice.

What about other political offices? There are no term limits for members of Congress. Term limits, if any, for state and local officials are spelled out in state constitutions and local ordinances.

How do Americans vote?

In most elections in the United States, voters need to vote either in-person at an official polling place or by casting an absentee ballot. Since local authorities rather than a single national authority conduct elections, different localities—even in the same state—can have different types of ballots and voting technology.

Today, very few voters mark paper ballots by putting an “X” next to a candidate’s name. That is because many localities use optical systems that mechanically scan paper ballots on which voters fill in circles or connect lines. Still others employ a wide variety of mechanized voting devices.

In recent years, several states have adopted procedures that make ballots available to voters before the election. Two states—Oregon and Washington—conduct their elections entirely by mail. Absentee voters generally return their completed ballots by mail.