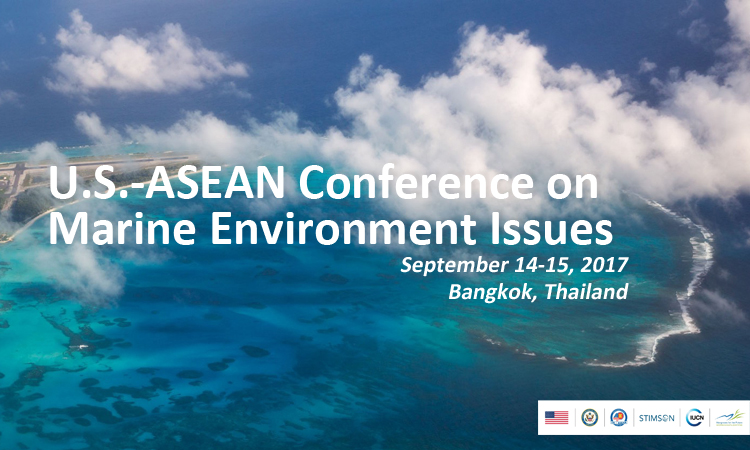 Building on numerous inaugural commitments announced at the Our Ocean Conference 2016 and the recent United Nations Ocean Conference, the event will provide key stakeholders with the opportunity to explore and recommend policies that will contribute to improved governance of marine and coastal resources. The conference will serve as a model to showcase and develop regional policies and technical work which can support Sustainable Development Goal 14 “Conserve and sustainably use the oceans, seas and marine resources” implementation and preparation for the 2017 Our Ocean conference this October in Malta and the Our Ocean Conference 2018 in Indonesia.

The U.S.-ASEAN Conference on Marine Environmental Issues brings together over 50 marine experts from think tanks, academia, the private sector, nongovernmental organisations and governments across ASEAN member countries, as well as the United States, India, Japan and Australia.

The Stimson Center, on behalf of the U.S. State Department and in collaboration with International Union for Conservation of Nature (IUCN) and the Mangroves for the Future (MFF) Program, is co-chairing the conference.

“Just as plastic in our oceans know no boundaries, enhancing scientific knowledge and sharing data benefits everyone.  As Hurricanes Harvey and Irma have shown us, when natural disasters strike, there is strength in numbers.” — Glyn T. Davies, United States Ambassador to Thailand

The United Nations’ call to conserve and sustainably develop the oceans, also known as Sustainable Development Goal (SDG) 14, perhaps resonates most with Southeast Asia than in any other part of the world. With a maritime territory three times the size of its landmass, the region is one of the world’s most bountiful and diverse maritime areas. The ten ASEAN countries account for a quarter of the world’s fish production, and 20 million people depend on the fishery industry for their livelihoods.

The region’s vast coral reef system comprises 34% of the world’s reefs, and is a critical marine environment that provides essential habitat for fish and other marine animals to live and grow. Furthermore, corals and mangroves along the coast in Southeast Asia provide critical natural resilience against increasing storms and rising sea levels, as well as help to filter pollution as it runs off the land. But as populations expand and increasing stress is placed on these natural resources, Southeast Asia, like much of the globe, is at risk for overtaxing the marine environment. ASEAN nations must seek the right balance for sustainable development – one rooted in ensuring prosperity for all, while protecting the ocean.

Read the rest of the Op-Ed on the Bangkok Post’s website here: http://www.bangkokpost.com/opinion/opinion/1323939/conserving-southeast-asias-seas

“Einstein once said a problem without a solution is a poorly stated problem. The goal of this conference is to seek solutions: To convene the brightest minds, the most engaged activists, and some of our most enterprising political leaders to tackle these challenges. Together. With concrete solutions as our goal.” — Glyn T. Davies, United States Ambassador to Thailand.

IUCN is the world’s oldest and largest global environmental organisation, with more than 1,200 government and NGO Members and almost 15,000 volunteer experts in some 160 countries. IUCN helps the world find pragmatic solutions to our most pressing environment and development challenges. It supports scientific research, manages field projects all over the world, and brings governments, NGOs, the UN and companies together to develop policy, laws and best practice. IUCN’s Asia Regional Office is in Bangkok, Thailand, with country, programme and liaison offices in Bangladesh, Cambodia, China, India, Lao PDR, Nepal, Pakistan, Sri Lanka, Thailand and Viet Nam.

The Stimson Center is a nonpartisan policy research center based in Washington, D.C. working to solve the world’s greatest threats to security and prosperity. The Stimson Center’s Environmental Security Program explores the threat of illegal, unreported and unregulated (IUU) fishing, and its attendant crimes, to U.S. national and regional security, as well as the impact of distant water fishing (DWF) fleets on local communities. The Stimson Center’s Southeast Asia program addresses non-traditional security threats facing ASEAN countries and places special emphasis on issues related to water and energy in the Mekong Basin.