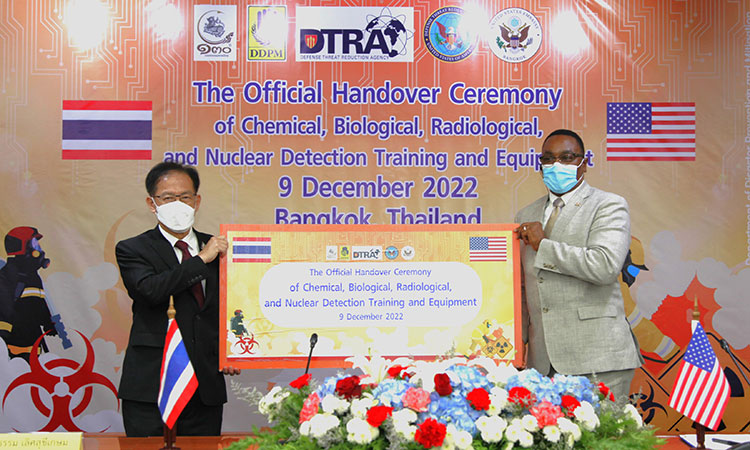 The United States Defense Threat Reduction Agency (DTRA) donated chemical, biological, radiological, and nuclear (CBRN) detection equipment worth USD $2.1 million to the Kingdom of Thailand’s Department of Disaster Prevention and Mitigation (DDPM) during a handover ceremony on December 9, 2022 at DDPM headquarters in Bangkok.

Mr. David L. Musgrave, Director of On-Site Inspection and Building Partner Capacity at DTRA, and Mr. Boontham Lertsukekasem, Director-General of the DDPM, provided remarks, noting the close partnership between the United States and the Kingdom of Thailand to address the risk of CBRN weapons, including the ongoing training provided by the United States to build Thailand’s capacity to detect and counter weapons of mass destruction. The handover ceremony officially transferred over 200 pieces of equipment, which included the necessary training to effectively operate and maintain the sophisticated detection equipment.

For over two centuries, the U.S.-Thai relationship has evolved into a robust friendship, partnership, and alliance that benefits both our people and the broader Indo-Pacific region. Our security alliance ensures that we are prepared to address the future threats that affect both our countries, such as climate change, pandemics, and humanitarian crisis. The DTRA-DDPM partnership to reduce the risk from weapons of mass destruction is another example of how strong U.S.-Thai security ties benefit both our countries and our people.