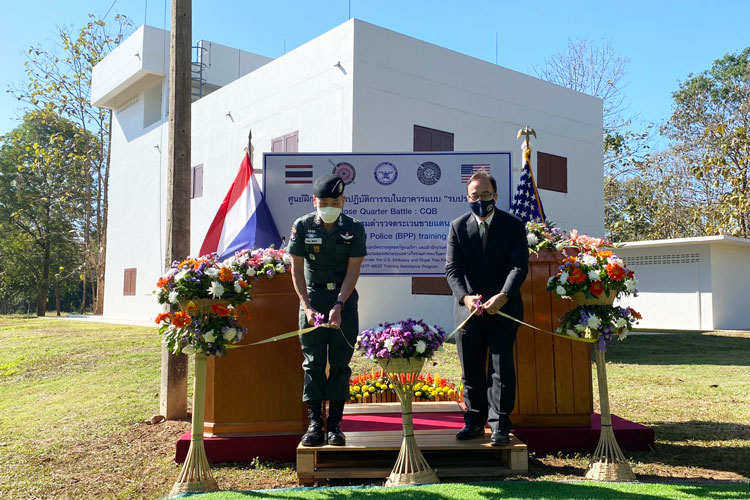 This $600,000 (19.8 million THB) facility includes ranges, a mock village, a three-story tactical training building, and equipment.  The BPP will utilize the updated facility, new equipment, and closed-circuit digital recording system to conduct training scenarios in a variety of environments and review and analyze footage of the training for future improvements.  The United States’ overall $1.2 million (40 million THB) contribution to the BPP in northern Thailand includes support for this facility as well as upcoming training programs.

At the event, U.S. Embassy Chargé d’Affaires Michael Heath highlighted the breadth and depth of the U.S.-Thai partnership and underscored our security collaboration.

“Our longstanding law enforcement cooperation combats transnational crime, including illicit trafficking of people, narcotics and wildlife, helping to keep people in both our countries and the region safe,” said Chargé d’Affaires Heath.

“U.S. support for this facility, which will enhance the BBP’s ability to counter illicit transborder activity, demonstrates our commitment to our partner and ally Thailand,” said Rear Admiral Charles Fosse, the Director of U.S. Indo-Pacific Command’s Joint Interagency Task Force West (JIATF West), which provided funding for this training center.

BPP Deputy Commissioner Pol.Maj.Gen. Varayuth said, “I am grateful to our U.S. partners for your long-term support and continued collaboration.”

The United States and Thailand cooperate to advance mutual interests in all sectors, including health, commerce, education, and security.  Our extensive law enforcement partnership signals the importance we place on Thailand as a partner and regional leader.