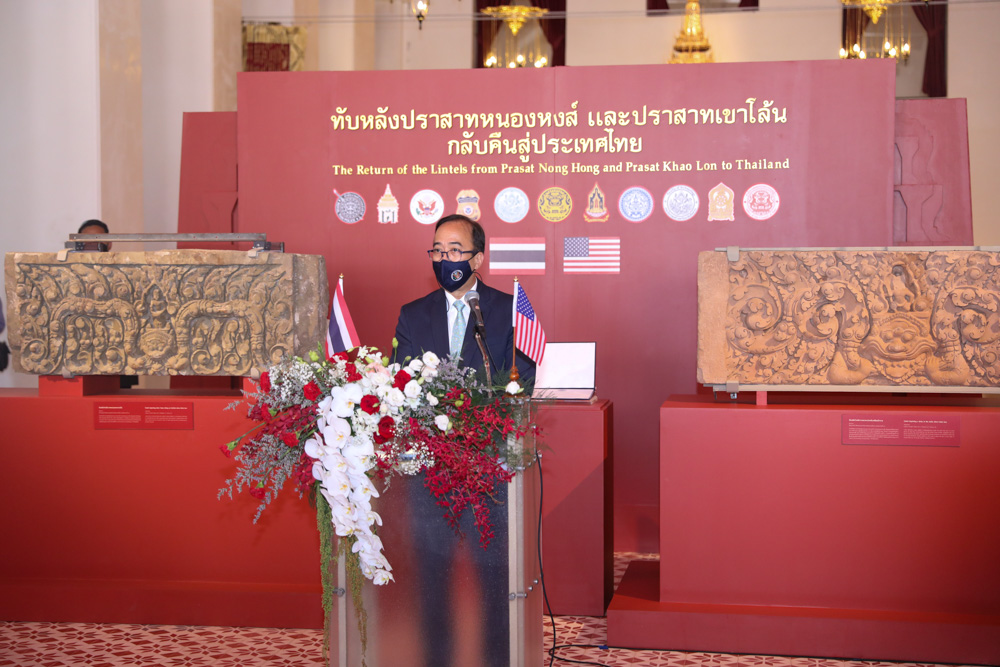 The U.S. government welcomes the return of two 11th century stone lintels to Thailand, marking the end of a four-year effort on behalf of the United States and Thailand to bring these items home.

“These two lintels are visible symbols of Thai culture and history, and the United States government is proud to have fought for their return to Thailand,” said the U.S. Charge d’Affaires Michael Heath who represents the U.S. government at the handover ceremony today.

Presided over by Deputy Prime Minister Wissanu Krea-ngam, the handover ceremony was made possible by close collaboration between the Thai and the U.S. governments, which partnered to seek the return of the two religiously significant lintels.

The cooperation officially kicked off in 2017 when a group of independent academics collected information about a number of overseas Thai antiquities and worked with the Prime Minister and the Ministry of Culture to establish a committee to repatriate these important artifacts.  The committee agreed to pursue the return of the two lintels, originally from Prasat Nong Hong in Buri Ram and Prasat Khao Lon in Sa Kaeo, which were on display at the Asian Art Museum in San Francisco.

The Culture Ministry and Ministry of Foreign Affairs worked closely with U.S. Homeland Security Investigations (based out of U.S. Embassy Bangkok) and the U.S. Attorney’s Office of the Northern District of California to complete the legal process necessary to remove the items from the collection of the Asian Art Museum in San Francisco so that they could be repatriated to Thailand.  The two lintels arrived in Thailand on May 28, 2021.

“We celebrate the return of these lintels and know that, thanks to our close law enforcement cooperation and bilateral ties, they will now be seen by Thais young and old, as they admire the very rich traditions of their Kingdom,” said Mr. Heath, adding, “The United States is a country of laws, and the laws are very clear regarding cultural relics that belong to other nations.”

The United States has an unbreakable friendship with Thailand, our oldest ally in Asia.  Together, we partner to strengthen our health, education, military, economic and people-to-people ties.

The repatriation of these significant items represents another milestone in our long history of cultural cooperation, which also includes support to restore Wat Chaiwatthanaram in Ayutthaya through the U.S. Ambassadors Fund for Cultural Preservation.

The stone lintels, according to the agreement, were returned to Thailand through the U.S. Department of Justice’s victim remission program. Upon their return, the lintels will be placed on exhibition at the Bangkok National Museum for three months.