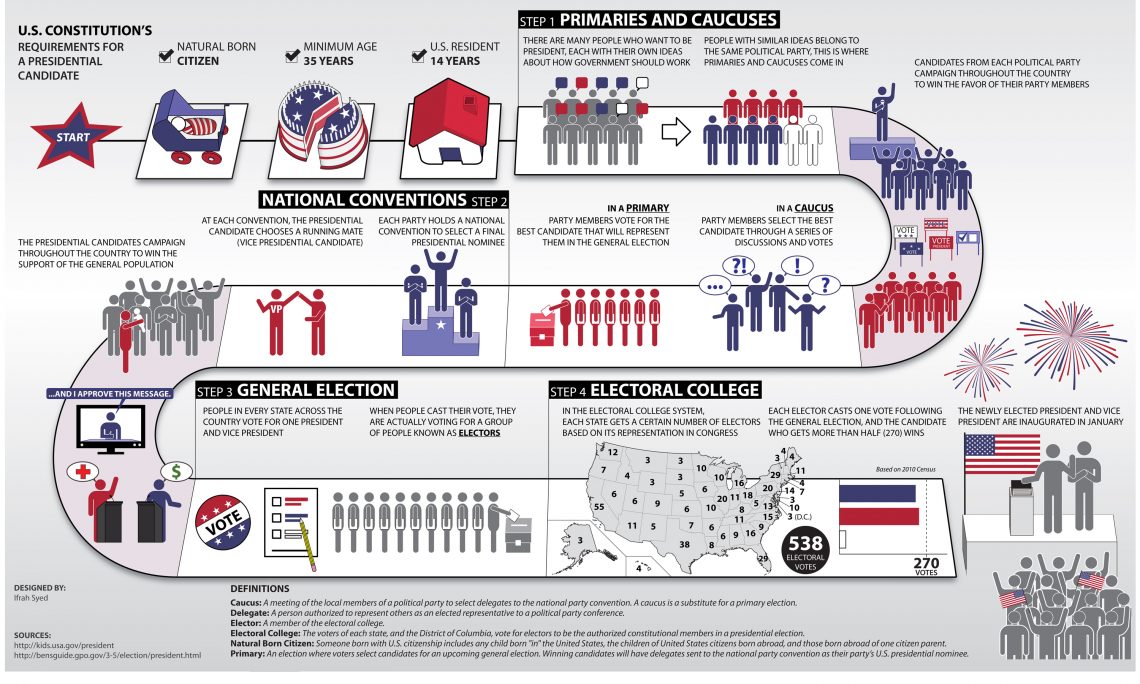 About a year before the elections candidates from the two main political parties the Democrats and the Republicans begin their campaign trails. They set up their team and start “going on tour” around the country to rally for support and to fundraise for their campaigns.

At the start of the campaigns the candidates from both parties participate in televised debates. During the debates each candidate will have to answer tough questions about their policies as well as defend their stance on issues and policies against other candidates.

The Primaries and Caucuses

Beginning in February the main voting events Primaries and Caucuses will lead to a selection of delegates who will represent the people at the upcoming conventions. The main focus will be on the results from Iowa New Hampshire Nevada and South Carolina which can usually determine who the final presidential nominee for each party will be.

Around July presidential nominee hopefuls will start announcing their choice of “running mate”—the individual who will become vice president if the nominee is elected president.

At the National Conventions state delegates from the primaries and caucuses selected to represent the people will now “endorse” their favorite candidates and the final presidential nominee from each party will be officially announced at the end of the conventions.

The Electoral college is a process in which electors or representatives from each state in number proportional to the state’s population cast their vote and determine who will be president. There are a total of 538 electors selected according to each state’s policy. To win the presidency the presidential nominee must receive at least 270 electoral votes.

When Americans go to the polls on November 8 they will select their favorite presidential candidate and running mate. Except in the states of Maine and Nebraska if a candidate receives the majority of the votes from the people of a state then the candidate will receive all electoral votes of that state. The presidential nominee with the most electoral votes becomes the President of the United States.