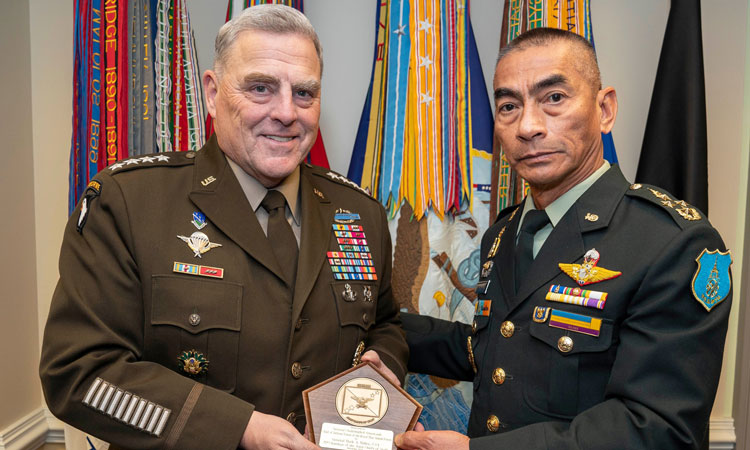 Statement on the Visit of Thailand Chief of Defense Forces

At the Pentagon, General Chalermpol met with his American counterpart, General Mark A. Milley, Chairman of the Joint Chiefs of Staff, to discuss shared objectives for the Indo-Pacific region and opportunities to further strengthen the U.S.-Thai alliance.  General Chalermpol also met with Dr. Ely S. Ratner, the Assistant Secretary of Defense for Indo-Pacific Security Affairs.

General Chalermpol was hosted for dinner at the official residence of General Daniel R. Hokanson, Chief of the National Guard Bureau.  The two discussed Thailand’s 19-year-old state partnership with the Washington National Guard, our mutual interests in enhanced cybersecurity, and how the interoperability of our forces benefits Americans, Thais, and communities across the broader Indo-Pacific region.

On December 14, General Chalermpol took part in a wreath laying ceremony with soldiers from the 3rd U.S. Infantry Regiment, known as “The Old Guard,” at Arlington National Cemetery.  Arlington National Cemetery is the most hallowed ground in the United States, and its rolling hills mark the final resting place for more than 400,000 veterans and family members.  General Chalermpol’s participation in this ceremony is a reminder of the shared sacrifices Americans and Thais have made over the long history of our alliance.

On 16 December, General Chalermphon visited the United States Military Academy at West Point and met with Superintendent Lieutenant General Darryl Williams.  Established by President Thomas Jefferson in 1802, West Point is the United States’ oldest service academy, and hosts up to 60 exchange cadets annually.  The delegation toured West Point’s famous grounds, including a stop at “The Plain” parade field.  During the visit, General Chalermpol also met with a Thai exchange cadet.  It was a special opportunity for the cadet to speak with the highest-ranking Thai officer and reconnect with home before returning to studying for exams.

General Chalermpol’s first overseas trip as Thailand Chief of Defense Forces is another significant marker in the U.S.-Thai partnership.  #FriendsPartnersAllies