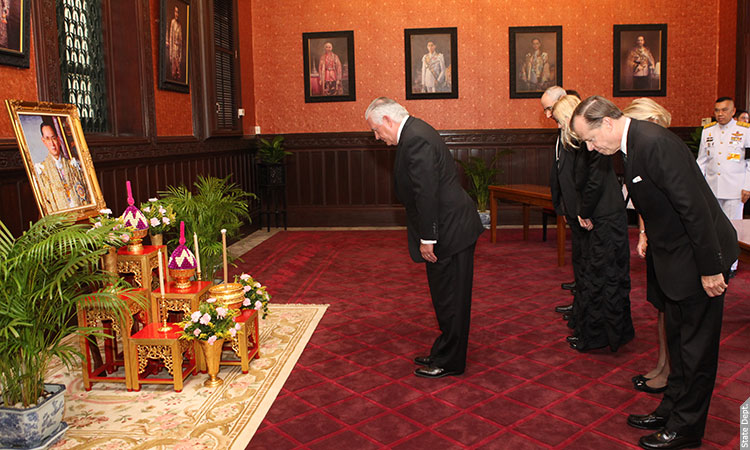 Secretary of State Rex Tillerson paid an official visit to Thailand on August 8th as guest of the Ministry of Foreign Affairs of the Kingdom of Thailand. The Secretary will underscore the U.S. commitment to the bilateral relations with Thailand, and to pay respects to His Majesty the late King Bhumibol Adulyadej.

Secretary Tillerson greeted the U.S. Embassy staff and their families at the Ambassador’s Residence to kick-start his visit to Thailand. He expressed gratitude and appreciation for American and Thai staff contributions before participating in a photo-op with children, the visiting U.S. Congressmen of Rodney Frelinghuysen (R-NJ) and Henry Cuellar (D-TX), as well as the U.S. Marines.

Secretary Tillerson greeted counterpart Minister of Foreign Affairs Don Pramudwinai to celebrate the strong ties between the U.S. and Thailand, a friendship of nearly 200 years.

Secretary of State Rex Tillerson signed the book of condolences at the Red Room of the Chambers of the Bureau of the Royal Household at the Grand Palace to pay tribute to His Majesty the late King Bhumibol Adulyadej, the only monarch to be born in the United States.