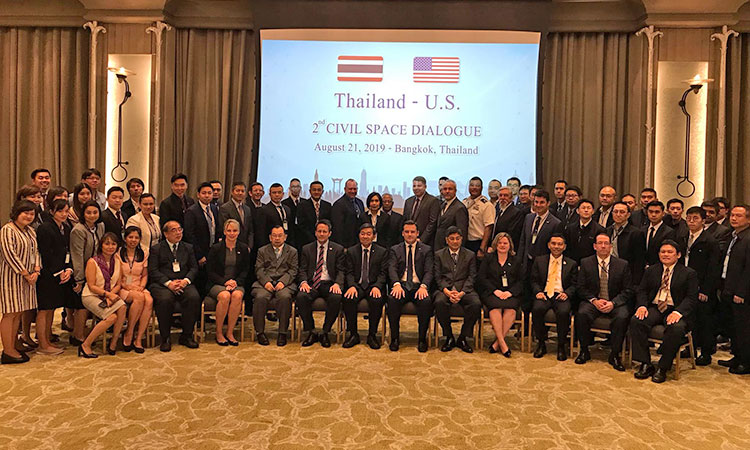 The United States was pleased to take part in the second U.S.-Thailand Civil Space Dialogue hosted by the Ministry of Higher Education, Science, Research, and Innovation (MHESI) in Bangkok on August 21-22, 2019.  The Ministry’s Permanent Secretary, Dr. Soranit Siltharm, opened the Dialogue followed by remarks by John Breidenstine, the Embassy’s Minister Counselor for Commercial Affairs, and Jon Harrison, Senior Advisor for the Bureau of Oceans and International Environmental and Scientific Affairs at the U.S. Department of State.

Senior Advisor Harrison welcomed the importance of this dialogue with public and private entities in Thailand. He welcomed Thailand’s key role in this industry, noting the Thai government was demonstrating “leadership in a critical undertaking for the future of Thailand and of South East Asia” by elevating space issues as a national priority through executive policy, legislation and economic development programs. The U.S. delegation highlighted President Trump’s ambitions in the space industry driven by the U.S. National Space Council, under Vice President Pence’s leadership.

The Dialogue brought together government representatives the Ministries of Defense, Foreign Affairs, and Digital Economy and Society; MHESI; and Thailand’s space agency, Geo-Informatics and Space Technology Development Agency (GISTDA) with U.S. representatives from the Departments of State, Commerce, and Defense as well as the U.S. Geological Survey and the National Aeronautics and Space Administration (NASA). Both sides agreed on the value of continued dialogue and steps toward increased scientific, economic, and security cooperation.

On the first day, the U.S. and Thai governments discussed space policy and existing and potential future areas for bilateral civil space cooperation, such as space traffic management, earth observation, space weather, and maritime domain awareness.  On August 22, the governments welcomed participants from industry, academia, and civil society to broaden the conversation on economic and scientific opportunities for cooperation.

Kevin O’Connell, Director of Space Commerce at the U.S. Department of Commerce, commented on the importance of partnership in our collective pursuit of the trillion dollar space economy over the next two decades, noting that “extraordinary innovations in the space sector are changing traditional space business models as well as creating new ones; an extremely diverse set of talent will be needed in a sector believed to be one of the strongest growing economic sectors over the next two decades.”