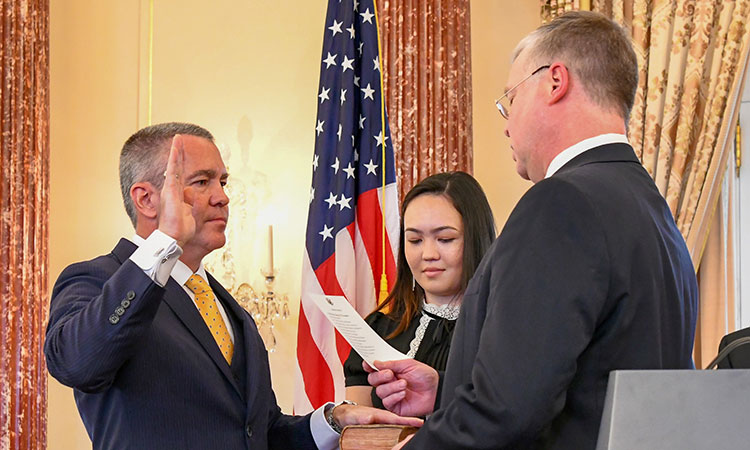 I would like to thank the Deputy Secretary for his kind words.  Your leadership of the Department is exemplary.  It has been a true pleasure getting to know you these last months and I look forward to further working with you and your team.

I would like to particularly thank my parents, Eugene and Nancy, my two daughters Winnona and Gabrielle, and my cousin Keith for being here today and delivering the opening invocation.

To my colleagues and friends, some who have traveled far to be here today, thank you for your continued support.

And most importantly to my wife, Jean, and our two sons, Michael Ray and Phoenix, who have endured the long confirmation process and have accompanied me to Bangkok; I am indebted to their patience and understanding.  Unfortunately given my wife’s obligations running a multinational healthcare business in Japan and Korea and my sons’ new school in Bangkok they were not able to join me here today.

As my wife told me in her typical no-nonsense fashion: “Hey: I came to your Senate hearing which you told me was more important.”

I am deeply honored by President Trump’s appointment of me as the United States Ambassador to the Kingdom of Thailand, a mission of critical importance for the American people.

Growing up on the southside of Chicago, I have always been motivated to give back to my country for the opportunities it has afforded me and my family. My mother grew up on a farm in rural Minnesota.  My paternal grandfather was a barber in small-town Wisconsin. My parents were first in their families to attend college and both had successful academic careers.  I have been fortunate to have had a successful 25-year career as an international business lawyer.  From farmer/barber to professor to lawyer.  It is the freedoms enshrined in our Constitution that support and facilitate the great opportunities in America to succeed through hard work.  I am so honored to have the opportunity to serve my country to preserve these freedoms and opportunities for all Americans.

I have spent over two decades assisting US and international companies expand their operations and investments in Asia and around the world.   One of my main principles when negotiating is to be “Hard on the Issues but Soft on the People”.   Which means for my position as Ambassador to the Kingdom of Thailand, I will doggedly pursue the interests of the American people while continuing and deepening the long-lasting friendship with the Royal Thai Government and the Thai people.

As the Deputy Secretary mentioned, Thailand and the United States have a rich history of friendship.  “Great and Good Friend” is the salutation President Abraham Lincoln used to address His Majesty Rama IV in 1862 when he wrote to thank the King for sending “rich presents … as tokens of goodwill and friendship for the American people.” This simple yet meaningful salutation continues to represent the multi-faceted partnership between our two nations.

For decades, our two nations have worked together to achieve shared security and prosperity.  Every year, through Cobra Gold, the Indo-Pacific’s largest annual multinational military exercise, we bring thousands of American soldiers into Thailand to participate side-by-side with Thai and Asian counterparts to prepare for future challenges. The 2018 rescue of the Wild Boar soccer team is a testament to how the close collaboration of our two militaries can save lives.

We also have a long history of cooperation between our law enforcement agencies.  This cooperation has led to the interdiction and seizure of unprecedented levels of drugs, particularly methamphetamine and heroin flowing from the Golden Triangle.

2020 also marks the 40th year of our CDC operations in Thailand.  Our deep cooperation between the CDC and Thailand’s Ministry of Public Health is critically valuable at this time in history.

Our respective private sectors have contributed to shared prosperity.  Thailand progressed from a developing nation to now Southeast Asia’s second largest economy.  Many major U.S. companies and small businesses contributed to that wealth generation and economic growth.  Members of the American Chamber of Commerce in Thailand have invested more than $50B in Thailand.  Thailand is also the third-fastest growing source of direct investment in the United States.  In December, Thai energy company Banpu held its grand opening of its new headquarters in Pennsylvania, capping off hundreds of millions of dollars in investment in U.S. shale.  I also am hopeful PTT GC, a large Thai Petrochemical company, will be able to finalize its $10 billion investment in Ohio.    We welcome these investments, which are creating jobs for our fellow Americans.

The foundation of our enduring bond, of course, is our extensive people-to-people ties.  This year is the 70th anniversary of Fulbright exchanges between our two countries, marked by celebrations that Ambassador Thani and I will each separately host later this spring.   Our Young Southeast Asian Leaders Initiative network, or YSEALI, has grown to nearly 15,000 members in Thailand since its inception in 2013.

We also look to Thailand as a regional leader in the Mekong region and Southeast Asia.   The Mekong River originates in the plateaus of Yunnan province in China, cuts through Mainland Southeast Asia, and empties into the Gulf of Thailand.  This massive river – which is almost 400 miles longer than the Mississippi River ­– is the world’s 2nd largest inland fishery, one of the planet’s most biodiverse ecosystems and home to over 60 million people dependent on this resource for their livelihoods.

The Mekong now faces major challenges: Massive dams on both the upper and lower stems of the river, unregulated city-size developments along the banks, and even proposals to blast apart the very foundations of the Mekong River.  In recent months the sediment rich, vibrant brown Mekong has turned limpid blue, indicating the lack of nourishment necessary for its ecosystem.

Growing up in Chicago on the edge of Lake Michigan, I know how historically important these major waterways are as a defining pillar of the identity of the communities around them.  At that time, development was severely damaging Lake Michigan and the Chicago river.  The Chicago river was so polluted that it famously caught on fire one year.  Fortunately, local and state governments cleaned up the river, and now the river walk is one of the most vibrant areas enjoyed by millions of people every year.

I know that the Mekong River is a critical issue for my Thai partners.  We are committed to working with Thailand and the nations who share the Mekong river to protect the natural environment and vital resources while ensuring that any developments bring benefits to all Mekong River nations.  This is why we supported Thailand’s reinvigoration of ACMECS and are expanding our own engagement in the region to work with all partners to support national sovereignty and the rule of law. And we are here to let you know that you have a partner in the United States.

My appointment comes after a long line of eminently qualified Ambassadors. Ambassador Glyn Davies, Kristy Kenney, Skip Boyce, to name a few. Some of you are here today.  Thank you for your service.  I was very pleased that during my confirmation process I was able to meet in person with my four immediate predecessors prior to my departure to Bangkok.  Each of them had great insights that I have already found very valuable.

The U.S.-Thai alliance is vital to American security and economic interests in the Indo-Pacific.  On behalf of President Trump,  I commit to each of you that as the United States Ambassador to the Kingdom of Thailand, I will do my utmost to serve and protect the interests of the American people and bring about shared peace and  prosperity to the benefit of the United States, the Kingdom of Thailand, and the region. I thank you all for joining me in this ceremony today.