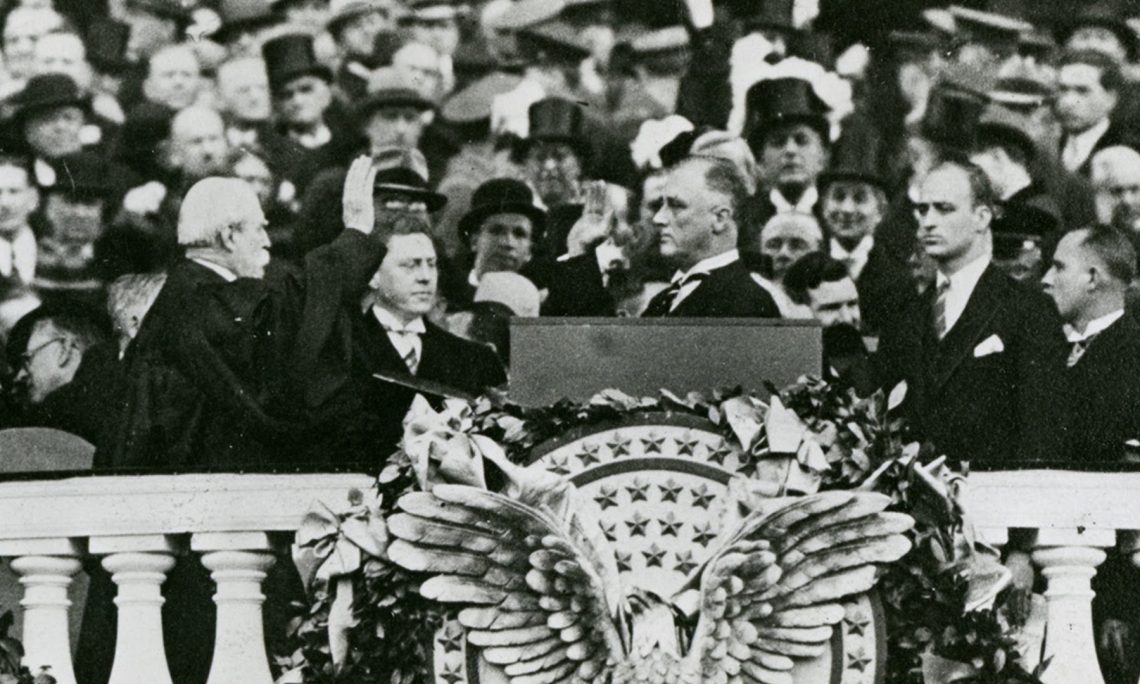 1960
President John F. Kennedy establishes the Peace Corps. The executive order created an opportunity for American civilians to volunteer and donate their time and skills to improving the lives of the people in underdeveloped countries.

1931
The Star-Spangled Banner is officially recognized as the United States’ national anthem.

1789
The U.S. Constitution takes effect. The first session of the U.S. Congress is held in New York City on this day.

1913
Woodrow Wilson becomes the 28th President of the United States.

1933
Franklin D. Roosevelt is inaugurated today as the 32nd President of the United States. It was during his address that he gave one of his famous quotes, “the only thing we have to fear is fear itself.”

1941
President FDR signs Lend-Lease Program. The program was crucial in aiding the U.S. allies during the World War II. It would provide money, materials and military resources to the Great Britian.

1933
President FDR gives his first “fireside” chat. A fireside refers to a radio broadcast of his address on radio straight from the White House. The program was launched as a way to comfort the people of the U.S. who at the time were facing the worst period during the Great Depression. It was called a fireside by a journalist as the broadcast made people feel like they were listening to the President sitting in his living room by a fireplace speaking earnestly to the people.

1967
The body of President JFK is moved to its permanent gravesite more than three years after his death. The president was a World War II veteran so he qualified for a plot at Arlington National Cemetery. His gravesite is also home to an eternal flame, a tribute to the President by the first lady Jackie Kennedy.

1965
President Lyndon B. Johnson calls for equal voting rights for all. President Johnson while addressing a joint session of Congress declared that “every American citizen must have an equal right to vote,” regardless of race or color.

1837
Grover Cleveland, the 22nd and 24th President of the United States, is born today in New Jersey. He was the only U.S. President to serve two non-consecutive terms.

1854
The Republican Party is founded on this day in Wisconsin. Former members of disbanded anti-slavery Whig Party got together on this day to discuss the formation of the new party.

1972
The Equal Rights Amendment is passed by the U.S. Senate and sent to the states for ratification. The amendment reads, “Equality of rights under the law shall not be denied or abridged by the United States or any State on account of sex.”

2010
The Affordable Care Act, or commonly known as “Obamacare,” is signed into law today by President Barack Obama.

1775
Thomas Jefferson is elected to the Continental Congress. This Virginia delegate would later become the 3rd President of the United States.

1969
President Eisenhower dies. The 34th president of the United States died in Washington DC at the age of 78.

1870
The 15th Amendment to the U.S. Constitution went into effect, guaranteeing the right to vote regardless of race.

1870
The 15th Amendment to the U.S. Constitution goes into effect, guaranteeing the right to vote for all U.S. citizens regardless of race.

1981
An assassination attempt was made on President Ronald Reagan. He was shot in the chest by John Hinckley, Jr, a deranged person who was later placed in a mental institution after he was found not guilty by reason of insanity.