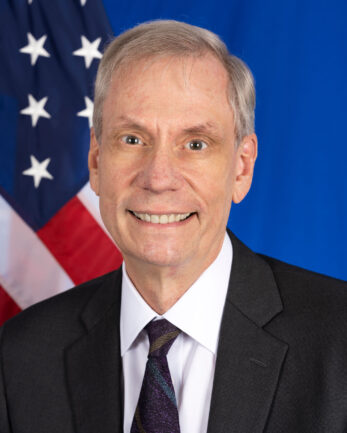 Robert F. Godec was confirmed by the Senate as Ambassador to Thailand on August 4, 2022. This is his third ambassadorship; he previously served as Ambassador to Kenya from 2013 to 2019 and Ambassador to Tunisia from 2006 to 2009. Other recent positions include acting Assistant Secretary of State for African Affairs and Senior Coordinator for Afghanistan in the Bureau of Population, Refugees, and Migration.

In addition to earlier assignments in South Africa and Kenya, Ambassador Godec has served as Assistant Office Director for Thailand and Burma in the Bureau of East Asian and Pacific Affairs and Director for Southeast Asian Affairs at the Office of the U.S. Trade Representative.

Ambassador Godec has a Master of Arts degree in international relations from Yale University, as well as a Bachelor of Arts degree in Foreign Affairs from the University of Virginia. He attended the State Department’s Senior Seminar and has received Presidential Meritorious Service Awards, a Distinguished Honor Award, and many other awards and commendations.

He is married to Lori G. Magnusson.