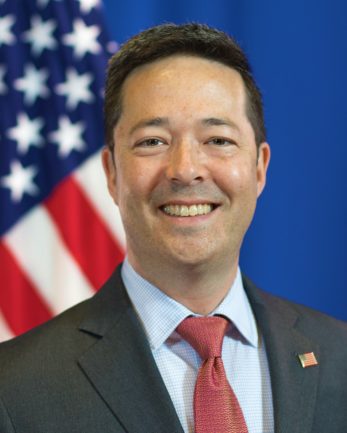 Sean O’Neill began his term as the United States Consul General in Chiang Mai in July 2019. Prior to his appointment as Consul General, Sean served as a legislative fellow on the staff of the Chairman of the U.S. House of Representatives Committee on Foreign Affairs in the 114th and 115th Congresses. Sean previously served at the U.S. Consulate General Hong Kong as Political Unit Chief; at the U.S. Embassy Kabul managing the work of America’s civilian-military field platforms throughout Afghanistan; and as the Political-Military Unit Chief in Bangkok. Earlier in his Foreign Service career, Sean served as a political officer in Burma, consular officer in Bangladesh and Pakistan, and a watch officer in the Department of State’s Operations Center.

Sean received a BA from Tulane University and a JD from the Fordham University School of Law. He was a capital markets attorney in New York and Tokyo before joining the Foreign Service in the wake of 9/11.