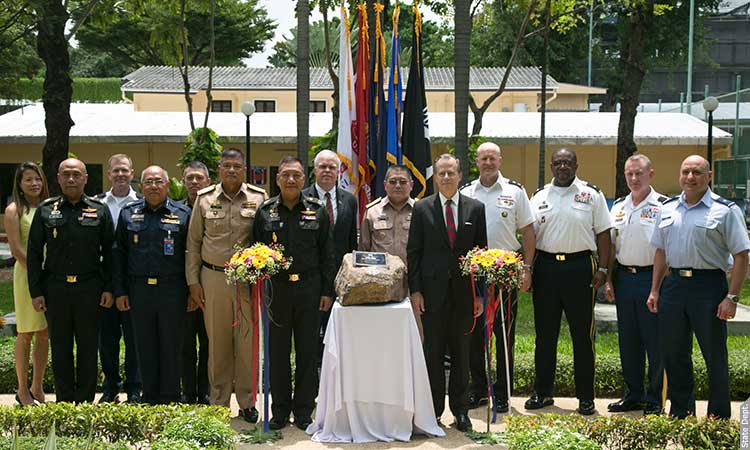 “JUSMAGTHAI was established in Bangkok 65 years ago, in the aftermath of a bloody Korean Conflict in which Thais and Americans fought side-by-side under UN Command, joined by forces from 19 other countries.  We take great pride in the strong Thai-U.S. military partnership, a cornerstone of the enduring relationship between our two nations.”  said Ambassador Glyn T. Davies. “Today, we also gather to recognize the sacrifices of those who fought for freedom but have yet to return home.  As President Abraham Lincoln said, ‘A nation that does not honor its heroes will not long endure.’ ”

The ceremonies included the playing of the national anthems of both countries performed by a Royal Thai Army band, remarks by guest speakers, the reading of a brief history of JUSMAGTHAI, a monument dedication, as well as the traditional “Missing Man Table” ceremony honoring the POWs/MIAs. Sixty senior Thai military officers, along with several senior U.S. military officers and members of the U.S. Embassy community attended the event.

JUSMAGTHAI was formally established on September 22, 1953. Although Thailand and the U.S. were already long-term friends, JUSMAGTHAI was created in joint recognition that the Cold War made a closer security partnership imperative.

The Thai-U.S. military relationship has continued to flourish and evolve to meet the security challenges of today. The annual Cobra Gold training exercise, inaugurated in 1982 as a bilateral event, has grown into the largest annual multilateral exercise in South East Asia, with up to 13,000 participants from seven nations and observers from another twenty. JUSMAGTHAI has helped the Thai military prepare for peacekeeping missions in Cambodia, East Timor, Aceh, and Sudan, as well as multi-national counter-piracy operations in the Gulf of Aden. With JUSMAGTHAI assistance, Thailand has become a regional hub for disaster relief, including the response to the 2004 Indian Ocean Tsunami, 2008 Cyclone Nargis, and the 2015 Nepal earthquake.  Most recently, JUSMAGTHAI coordinated U.S. assistance to the Royal Thai Government’s successful rescue of the Wild Boars soccer team at the Tham Luang Cave.

Sixty-five years after its founding, JUSMAGTHAI remains a critical cornerstone in the security partnership between the Kingdom of Thailand and the United States.