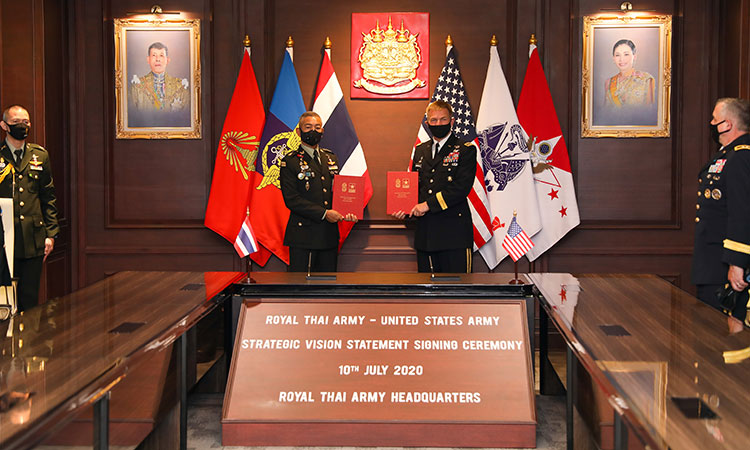 General James C. McConville, the Chief of Staff of the United States Army, visited the Kingdom of Thailand July 9 -10. General McConville met with General Apirat Kongsompong, Commander in Chief of the Royal Thai Army and was joined by Ambassador Michael George DeSombre for a meeting with Prime Minister Prayut Chan-o-cha to discuss the strategic partnership between our nations.

General McConville and General Apirat signed the Strategic Vision Statement on July 10, which energizes and enhances the bilateral army to army relationship, and outlines the vision and objectives the two army chiefs have as they work to deepen the 65 year old U.S.-Thai military alliance and prepare it for the future. The two officers discussed modernization, interoperability, joint training, and doctrine.

“Our alliance has a long and productive history, and now we are taking on 21st century challenges together,” said General McConville. “Our two nations typically have hundreds of military trainings and events each year, and we are working in unison with the Royal Thai Government to ensure that all of our training scenarios will be done with the utmost care with regards to the pandemic,” the general continued.

General McConville also visited the Armed Forces Research Institute of Medical Sciences (AFRIMS), a joint U.S.-Thai infectious disease center that has been at the cutting edge of pandemic research for decades. Thai and American scientists at AFRIMS are working side by side to defeat the world’s most deadly diseases, such as malaria, dengue, and COVID-19.

The signing of the Strategic Vision Statement between the two armies follows on the heels of the Joint Vision Statement signed between Secretary of Defense Mark Esper, and Minister of Defense and Prime Minister Prayut Chan-o-cha as part of the ASEAN meetings in November 2019.