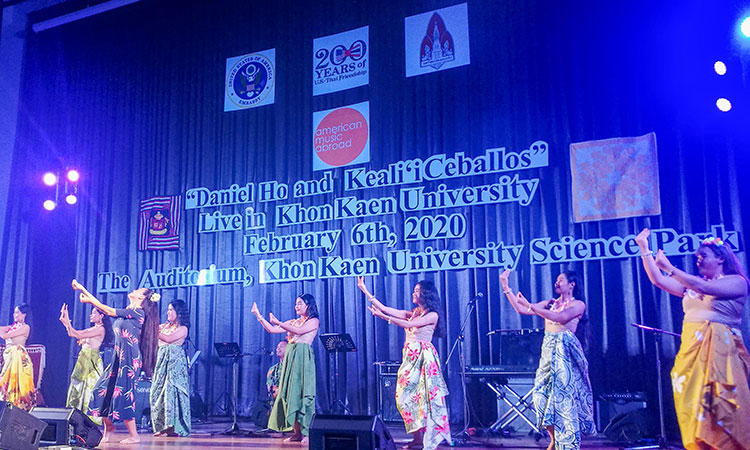 Hawaiian ukulele musician Daniel Ho and hula teacher Keali’i Ceballos were in Thailand last week and conducted workshops and concerts with students and Thai guest musicians in Phuket, Phang-nga, Khon Kaen and Bangkok from February 1-8, 2020. In Phuket, “Aloha Phuket: Hawaiian Festival” was held at Baan Ar-Jor on February 1 to celebrate 200 years of U.S.–Thai Friendship. The event was attended by Governor Mr. Phakaphong Tavipatana. The group then travelled to give workshops and performances at Phuket Rajabhat University, Phang-nga School for the Deaf and Yamaha Music School Phuket.

In Khon Kaen, our performers were joined by Isan traditional music and dance students from Khon Kaen University at a special concert attended by Khon Kaen Governor, Mr. Somsak Changtragul.

The program ended with a special showcase “Aloha Bangkok: Hawaiian Festival” at the Jam Factory on February 8. During the concert, Daniel Ho paid respect to His Majesty King Bhumibol Adulyadej The Great with his performance of “H.M. Blues” before collaborating with students to perform a Thai song, “Chang” (Elephant) and a traditional Thai dance “Ram Wong”.