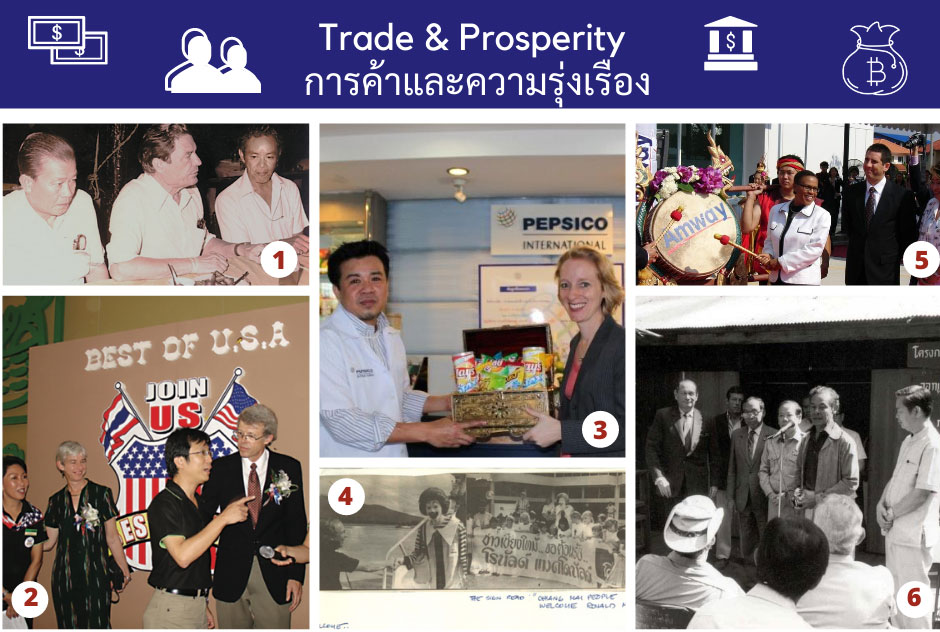 This year marks the 187th anniversary of the signing of the Treaty of Amity and Commerce between the United States and the Kingdom of Thailand, which marks the beginning of the U.S.-Thai commercial relationship. That relationship has flourished in the nearly two centuries since then. Hundreds of U.S. companies, employing tens of thousands of Thai nationals, have exported to and invested in Thailand to the mutual economic benefit of both our nations. Many of these brands and companies are recognizable names like PepsiCo, Frito-Lay, Ford, and Amway that have been in northern Thailand for decades and continue to believe Thailand is the right place to be.

In the 70 years since the establishment of the US Consulate in Chiang Mai, the United States and our partners and allies in northern Thailand have jointly expanded Trade and Prosperity through agricultural development initiatives, commercial investments, capacity-building projects, and through programs such as the Lower Mekong Initiative designed to address complex, transnational development and policy challenges in the Lower Mekong sub-region.

The Lower Mekong Initiative (LMI), established in 2009 by the United States and the countries of Cambodia, Laos, Myanmar, Thailand, and Vietnam, seeks to encourage equitable, sustainable, and inclusive growth in the Lower Mekong Region. LMI seeks to meet regional development challenges by implementing capacity building projects and programs with active involvement and close cooperation of LMI governments. Through the Lower Mekong Initiative and the SERVIR-Mekong program, the U.S. has partnered with allies in the Mekong region and contributed millions of dollars to promote transboundary water governance and conservation to help Thailand protect its borders and pursue a safer and more prosperous future for the Thai people.

In 1959, the Thai government outlawed the production of opium, a first step in the effort to eliminate the infamous narcotics trade of the Golden Triangle by introducing new crops and agricultural techniques to hill tribes and other northern farmers. His Majesty King Bhumibol Adulyadej The Great expressed his concern about the well-being of hilltribes in northern Thailand and their use of opium as a threat to Thailand’s standard of living and security. His Majesty subsequently directed efforts to finding suitable replacement crops for opium, and in 1972 the UN partnered with the King’s initial alternative development project.

Since the 1960s, U.S. researchers, missionaries and business people have joined with the U.S. and Thai governments to contribute to rural development initiatives that have led to Thailand being recognized as a world model in the area of crop substitution and drug reduction. U.S. foundations such as the Ford Foundation and Rockefeller Foundation supported training and research in agricultural development, initiating programs which continue to this day; the Ford Foundation’s work in agriculture and social sciences include the Multiple Cropping Project and the Regional Center for Social Science and Sustainable Development at Chiang Mai University.

Many USDA funded projects were carried out at the Ang Khang Research and Development Station, established in 1974 by the Royal Highland Agriculture Development Project, and now part of the Royal Project Foundation. In coordination with Kasetsart University and Chiang Mai University, USDA sought marketable crops capable of growing in the highlands. Peaches and other deciduous fruits were the first successful products.

In 1976, USDA began funding an agricultural extension program in northern Thailand that developed and cultivated a range of crops at five sites. USDA’s Agricultural Research Service financed and coordinated the cultivation of mushrooms, potatoes, chrysanthemum tea, carnations, coffee, herbs and spices and macadamia nuts as well as the raising of sheep. Many of the fruits, flowers and vegetables first introduced to the north through these programs are now marketed under the Doi Kham brand of the Royal Project Foundation and sold throughout the country.

From 1973-1986, USDA spent over $6 million on alternative development programs; during that same period and continuing into today, other U.S. government agencies provided over $86 million to bolster Thailand’s efforts to combat drug production, trafficking and usage and to build law enforcement capacity. In addition, USAID-funded projects such as the $10 million Mae Chaem Watershed Development Project from 1980-1989 reduced opium poppy cultivation, issued land use certificates to local residents, and improved the infrastructure, environment, land, agricultural production and social services in the district. Another USAID project, the $1.6 million Hill Areas Education Project, from 1980-1986 helped develop a non-formal primary education system for both children and adults that met the needs of highland peoples.

Thai statistics show that annual opium cultivation dropped from nearly 8,800 hectares of cultivated fields in 1985 to a relatively insignificant 110 hectares in 2005. The U.S. Mission to Thailand also maintains close cooperation with the Royal Project Foundation and the Mae Fah Luang Foundation, continues to support the training of anti-narcotics police agencies and, along with the U.S. National Institutes of Health, funds research on drug addiction and rehabilitation in Chiang Mai.

With continuous and broad U.S. support, Thailand has provided an international model of substituting alternative crops for opium production while also improving the lives of rural people, promoting demand reduction programs, and improving law capacity. Both the United States and the UN removed Thailand from their lists of “major” narcotics producing countries in 2004. The Royal Project Foundation, assisted for over thirty years by the United States and other nations, attracts researchers and government officials from all over the world interested in copying successful crop substitution and alternative development programs. Today, U.S. governmental and non-governmental partnerships with Thai agencies in northern Thailand continue to promote further improvements in the important agricultural, environmental and sustainable development sectors.