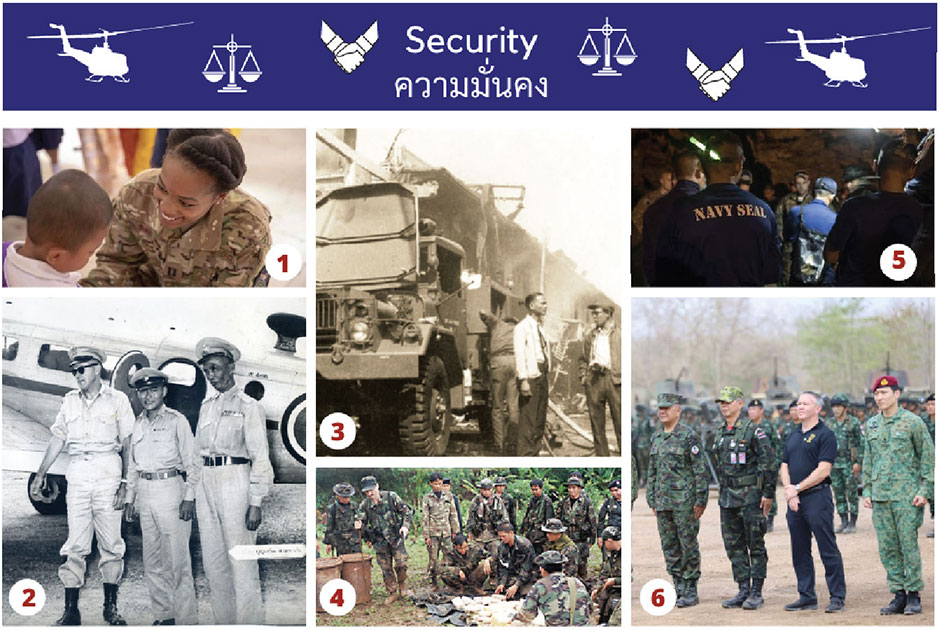 The U.S. supports ongoing Thai efforts to strengthen the criminal justice system, promote good governance and human rights, and preserve Thailand’s unique culture and sovereignty. The U.S. partnership with Thailand stretches beyond the bilateral relationship and has a positive impact on the broader region. The United States also encourages Thailand’s ongoing active contributions to regional and global security, as well as supports Thailand’s efforts to assist lesser developed countries through the Lower Mekong Initiative (LMI).

The United States is helping Thailand protect its borders and pursue a safer and more prosperous future for the Thai people. Since 1963, the U.S. Drug Enforcement Administration (DEA) has supported the Royal Thai Government’s efforts to stop the smuggling of controlled substances into Thailand, the United States, and the international market. The Federal Bureau of Investigation, the Department of Homeland Security, United States Agency for International Development (USAID), and the State Department are doing their part to combat human and wildlife trafficking and secure Thailand’s borders. In 2019, Secretary of State Pompeo announced a further $14 million to counter transnational crime and trafficking in the Mekong region. The United States Department of Defense partners closely Thai security partners in the region to train, equip, and enhance Thai capacity to detect, deter, and respond to transnational threat in the Mekong region.

Thailand and the United States have been defense treaty allies since the signing of the Southeast Asian Collective Defense Treaty in 1954 (Manila Pact). The most visible symbol of the U.S.-Thai Defense Alliance is Exercise Cobra Gold, the largest multilateral military exercise held in the Asia-Pacific region. In addition to Exercise Cobra Gold, the U.S.-Thai defense alliance also features more than 60 military exercises, 900+ aircraft visits, and 40+ ship visits every year to address mutual security challenges, and to strengthen U.S.-Thai interoperability and compatibility. Strong defense ties between the United States and Thailand are also reflected in Foreign Military Sales, strong military education and training programs, and other forms of mutually beneficial security cooperation.

The United States and Thailand work closely together and with the United Nations on a broad range of programs to halt illicit trafficking and other criminal activity. Thailand hosts the U.S.-funded International Law Enforcement Academy-Bangkok, which supports criminal justice institution building and capacity in Asia and has provided training to thousands of law enforcement professionals from all over Asia. Thailand has received U.S. military equipment, essential supplies, training, and assistance in the construction and improvement of facilities and installations for much of the period since 1950.

In 1971, the U.S. Drug Enforcement Administration established an office in Chiang Mai. The Sensitive Investigative Unit (SIU) in Chiang Mai is a vetted task force comprised of investigators from the Royal Thai Police Narcotics Suppression Bureau (NSB); the Office of Narcotics Control Board (ONCB); and the Provincial Police Narcotics Suppression Unit (PPNSU). DEA Agents and Intelligence Analysts are embedded in the unit and act as agent advisors to provide investigative support, operational funding, intelligence sharing and technical assistance to our Thai partners. The mission of the SIU Program is to help Thai law enforcement successfully conduct complex drug investigations to detect, target, and dismantle major international drug trafficking organizations. SIU and other NSB officers receive specialized training in DEA’s training facilities in Quantico, Virginia in addition to funding for equipment and training from the State Department’s Bureau of International Narcotics and Law Enforcement Affairs. In partnership with the Royal Thai Government, the United States has been instrumental in Thailand’s successful efforts to eliminate opium and develop sustainable agriculture in the northern region. The U.S. Department of Agriculture, the Department of State, USAID and DEA have all been part of this effort.

In 2020, Secretary Pompeo also announced approximately $2 million for the Mekong Water Data Initiative to empower Mekong researchers to share data on water flows. Through the SERVIR-Mekong program, an initiative between USAID and the U.S. National Aeronautics and Space Administration (NASA), publicly available satellite data will help the lower Mekong governments reduce vulnerability to drought, flooding, and transboundary water competition exacerbated by upstream dams. In 2020, the Mekong River Commission also launched the Drought Early Warning portal, an online platform co-developed with SERVIR-Mekong, that lower Mekong countries can use as an early warning system to forecast and monitor drought in the region. These are just a few of the many initiatives we are implementing jointly with the Royal Thai Government and lower Mekong countries to uphold the rule of law, combat transnational crime, and protect water resources through scientific data that promotes honest discussions and resolutions on how to equitably distribute water resources.