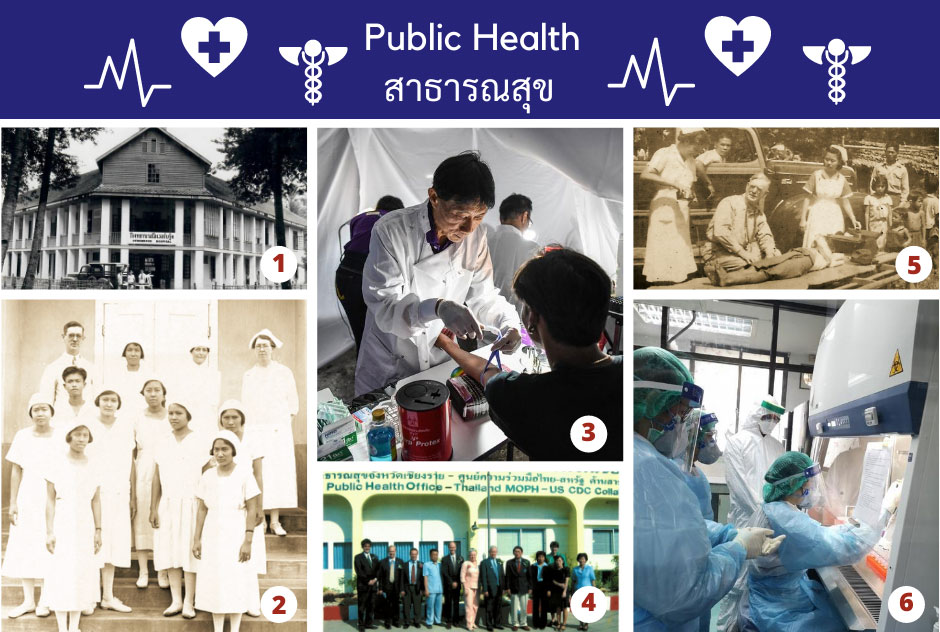 Early Thai-American partnerships in medicine that created the first hospitals and the first nursing school in northern Thailand continue today as major teaching and research projects. A legacy of 148 years of Thai-American cooperation in medical education produced internationally recognized facilities such as Chiang Mai University’s Medical School and Payap University’s McCormick Faculty of Nursing. On the research side, U.S.- Thai collaboration has evolved to a focus on jointly combating worldwide health threats such as HIV/ AIDS and emerging infectious diseases.

Beginning with the arrival of Dr. C.W. Vrooman in 1872, Americans introduced medical techniques such as surgery, first performed in Chiang Mai by Dr. Vrooman. American doctors also brought to the north medicines such as quinine, the smallpox vaccine and devices such as the X-ray. By 1900, Americans had established hospitals in five provinces — Chiang Mai, Lampang, Phrae, Nan and Chiang Rai — with financial support and approval from northern princely families and local communities.

In 1888, Dr. Vrooman constructed the first medical establishment in northern Thailand, the American Mission Hospital. This building on the west bank of the Ping River, which today houses the Thai Red Cross, was built with $10,000 from the Board of Foreign Missions of the Presbyterian Church in America.

In 1889, Dr. James W. McKean assumed leadership of the American Mission Hospital, expanding and improving the facility. In 1904 he established a lab for the production of vaccine; his pioneering smallpox vaccination program reached people throughout the country. In 1908, Dr. Edwin C. Cort became the new director. He moved the hospital to the east side of the river in 1920, later renaming it “McCormick Hospital” in recognition of financial support from a far-away benefactor, Mrs. Cyrus McCormick of Chicago, Illinois. The prince of Chiang Mai, Chao Kaew Nawarat, and Princess Dara Rasmi also donated money.

McCormick Hospital is particularly proud that Prince Mahidol, widely known as the father of Thai medicine, practiced there in 1929 after completing medical training at Harvard University and MIT in the United States, Prince Mahidol had shown interest in working at the hospital as early as 1925 when he discussed the matter with Dr. Cort while presiding over a ceremony there.

Early American missionaries in northern Thailand such as Dr. McKean often filled many roles at once. In addition to his work at the American Mission Hospital, Dr. McKean founded Southeast Asia’s first leprosy sanatorium in Chiang Mai. He was inspired to begin this effort when lepers, hearing rumors of modern medical treatment, began to gather in front of the American Mission Hospital. Dr. McKean secured funding from the American Leprosy Mission and the Presbyterian Church USA; Chiang Mai Prince Intawarorot granted McKean 160 acres of land for the sanatorium in which the disabled could live together in one self-contained community. Lepers from all over the country flocked to the McKean Center, most of them walking or traveling at night in order to hide their disfigurement from the public.

As the center made headway in eliminating leprosy in Thailand, the facility expanded its mission to all forms of disabilities and now offers rehabilitation services to accident victims, as well as those with paralysis, victims of stroke and the aging. Today the McKean Rehabilitation Center is recognized throughout the world, attracting staff, doctors and volunteers from the United States as well as other countries.

From the beginning of their involvement in northern Thailand, American medical missionaries aspired to build medical schools. Dr. Cort’s efforts in 1916 to open such a school in Chiang Mai with four Thai medical students in a building at Prince Royal’s College became instead a nursing school. Founded in 1923 by Dr. Cort with the financial help of Mrs. Cyrus McCormick, the McCormick Nursing School was the first nursing school outside Bangkok and only the third in the nation at that time.
Graduating its first class in 1926, McCormick Nursing School expanded rapidly and gained a reputation as one of the most prestigious nursing schools in the region. The support of Chiang Mai’s royal family again helped, as the granddaughter of Prince Chao Kaew Nawarat, Princess Wongchan Na Chiengmai, attended the school and later used her skills to care for Princess Dara Rasami, consort of King Chulalongkorn, and her aging grandfather.

The Research Institute for Health Sciences is the outgrowth of a project that began forty years ago when St. Louis University and the National Institutes of Health funded the Malnutrition and Anemia Center (MALAN) in Chiang Mai, focused on child health research. Chiang Mai University’s Faculty of Medicine, founded with U.S. government support, worked closely with MALAN in these developmental years. In 1978, the center, renamed RIHES, became a free-standing research institute and partnered with the university. RIHES trains Thai researchers in epidemiology, data and laboratory management, virology, behavioral science, research ethics, and clinical trials.

The U.S. Centers for Disease Control had a field station at Chiang Rai in from 1991 to 2007 for research on HIV/AIDS, which was spreading rapidly in the region. As a successful national campaign raised awareness and slowed the spread of HIV/AIDS, the CDC research broadened its focus to include diseases such as of chlamydia, gonorrhea, herpes and tuberculosis.

Beginning 140 years ago, U.S. medical pioneers laid the groundwork for the first clinics, hospitals and nursing education in northern Thailand. The Thai-U.S. partnerships established then continue today, building on a valuable legacy in a wide variety of teaching and research projects to focus on jointly combating worldwide health threats.