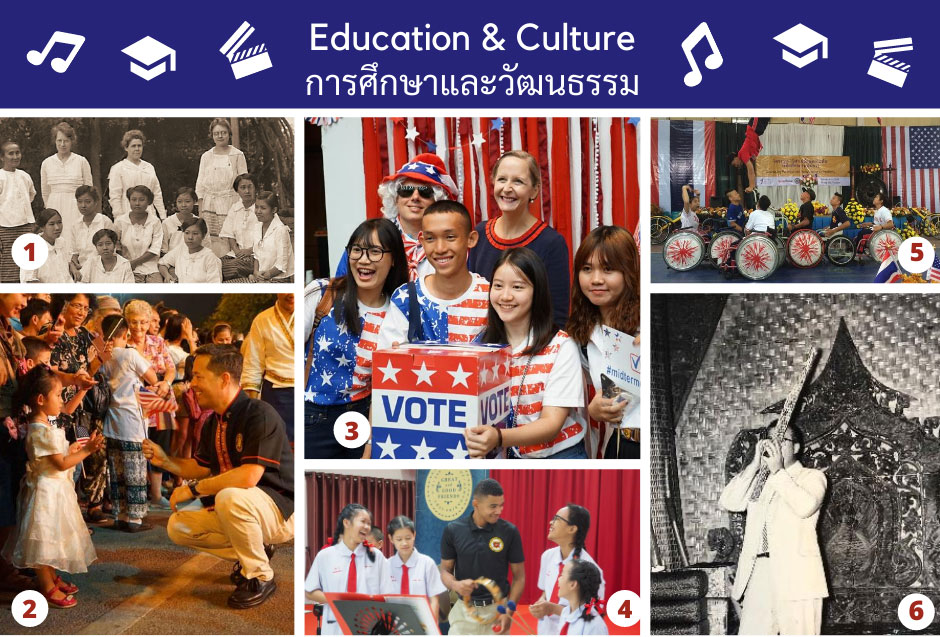 One of the most significant contributions made by Americans in northern Thailand has been in the area of education.

From the first western schools established in Chiang Mai in the 19th century to extensive linkages today, Americans have played a key role in the educational development of northern Thailand. Successful educational institutions remain one of the most prominent and continuing legacies of early American involvement in northern Thailand.

Until the late 19th century, education in northern Thailand was available only for boys and primarily in Buddhist temples. Seeing the United States as a country that did not aspire to build Southeast Asian empires, H.M. King Mongkut first permitted U.S. English language teachers into the Royal Palaces in the mid-1800s. In his view, the Americans represented a “neutral” force between France in the east and England in the west. Since then, Americans have worked extensively with Thais to build modern schools and incorporate new teaching methods to improve education throughout northern Thailand.

The first Western school in northern Thailand was directed at educating girls. Dara Academy, now co-ed, traces its origins to American missionary Sophia McGilvary’s decision to open her Chiang Mai home to girls in 1875. As the popularity of these gatherings increased, McGilvary sought out land to develop an actual school for girls. Thus in 1879 Edna S. Cole and Mary Campbell founded and became the first director of the “American Girls’ School” in Chiang Mai. The school was later named Dara Academy in 1923 in memory of its early patron, Chiang Mai Princess Chao Dara Rasmi, consort of King Chulalongkorn.

The “Chiengmai” Boys’ School, the forerunner of the Prince Royal’s College, was founded under similar auspices. In 1887, American Presbyterian Rev. D.G. Collins moved from Bangkok to Chiang Mai to set up a school on the west bank of the Ping River. The school began with 2,000 baht and about 30 students. As the first headmaster, Collins not only oversaw the administration of the school but laid the foundation for Western education in northern Thailand, learned the local Lanna dialect, sought networks of support from the local community, managed the continual campaign for funding from U.S. donors, and established the first printing press in northern Thailand.

By 1906, the Chiengmai Boys’ School had re-located to the east side of the river and received from His Majesty King Vajiravudh (then His Royal Highness Crown Prince Maha Vajiravudh) the name of “The Prince Royal’s College.” In 2006, The Prince Royal’s College celebrated its 100th anniversary under this name and commemorated the early contributions Americans made in the school’s development.

Heartened by the success of these high schools, American missionaries began planning the construction of a private university in the North. The idea of establishing higher education in northern Thailand arose in the Chiang Mai community in the first part of the 20th century, when a group of American Presbyterians drafted plans for a “Laos Christian University.” Konrad Kingshill, a young Presbyterian missionary, arrived in Chiang Mai in 1947 to lay the groundwork for an enterprise that culminated in the establishment of Payap College almost 30 years later.

In 1974, after the Thai government approved plans for private colleges, the Foundation of the Church of Christ in Thailand opened Payap College, the first private college outside of Bangkok. Payap combined several American- founded institutions, primarily the McGilvary Theological Seminary and McCormick Hospital’s Nursing School. The college added a humanities faculty and absorbed the Theological Seminary’s church music department, making Payap the first school in Thailand to offer music as a course of study. In 1984, Payap College gained university status.

Payap University’s law building and international dormitory, dedicated in June 2007, were partially funded through the American Schools and Hospitals Abroad (ASHA) program of the U.S. Agency for International Development (USAID). The U.S. Government also provided over $1 million for Payap’s central library, the Sirindhorn Resource Learning Center, which opened in 2005. Under this program, Payap has received over $8 million in U.S. government funding since 1978.

U.S. citizens were instrumental in the founding and development of Chiang Mai University (CMU). The origins of the university lie with a 1954 decision by the Thai Council of Ministers to establish a medical school in northern Thailand. This project secured financial and developmental assistance from the U.S. Operations Mission (USOM) in 1956 and led to a long-term collaboration with the University of Illinois College of Medicine. The U.S. commitment to constructing the medical school included collaboration on a master plan, consultation from American technicians, consultants, and administrators, and a promise to provide American teachers to the university until Thai instructors were able to teach medical students themselves. The commitment also included a scholarship program that sent Thai students to the United States for graduate and post-graduate studies in basic and clinical sciences. In total, the United States government contributed some $3.8 million through USOM and its parent agency, USAID, for construction and support of the medical school.

In 1964, this medical school became the core of Chiang Mai University, the first institution of higher learning outside of Bangkok. Chiang Mai University today continues its relationship with the United States through linkages with some 40 American universities as partners in educational exchange. Via the Fulbright and other exchange programs, many faculty have received advanced degrees in the United States.

Today’s U.S. involvement in northern Thai education includes a broad set of exchanges for students and teachers. One popular means for high school study abroad is through agencies such as the U.S. government-supported AFS Intercultural Programs (originally the American Field Service exchange programs). Under this program thousands of Thai and hundreds of American students have lived and studied in each other’s countries. Other non-profit U.S. exchange agencies such as CIEE (Council on International Educational Exchange), IES (Institute for the International Education of Students) and SIT (School for International Training) have also established programs in Thailand to promote study and work abroad opportunities with the United States. Many American and Thai universities have also established private robust exchange programs for American and Thai students to learn about each other’s cultures.

For many decades the United States has attracted Thai students. According to an Open Doors report, over 6,636 Thai students enrolled in U.S. institutions of higher education in 2018. Beginning in 1924, Thai alumni of U.S. schools formed the American University Alumni Association. In 1952, the U.S. Embassy teamed up with this group to establish an English language center in Bangkok under the name “AUA.” These centers spread to other cities, with the United States providing money, teachers and administrative assistance through the mid-1990s. Today, 20 language schools remain as the heir to that partnership. These include AUA Chiang Mai, established in 1957, as well as AUA Chiang Rai, established in 1997. Since 2018, the U.S. Embassy and Consulate has collaborated with AUA on the English Access Microscholarship Program (Access), which provides a foundation of English language skills to bright, economically disadvantaged students, primarily between the ages of 13 to 20. Access programs give participants English skills that may lead to better jobs and educational prospects. Participants also gain the ability to compete for and participate in future exchanges and study in the United States.

In 1980, USAID funded the Hill Areas Education Program of the non-formal Education Department Effort to Promote Thai Literacy. This educational program cooperated with local villagers in the northernmost regions with the intention of teaching practical goals such as obtaining Thai citizenship or preventing drug use. Many participants moved on to highland development work through the UN, NGOs or new government initiatives in later years.

In the late 1990s, the U.S. Departments of State and Education contributed funds to establish two community colleges in the province of Mae Hong Son, the first post-secondary school institutions in this province along the Myanmar border.
Another U.S. government institution with a long relationship with Thailand and the north is the Peace Corps; since 1962, some 5,507 Peace Corps Volunteers have served in Thailand in a variety of capacities. Peace Corps Volunteers in Thailand have contributed to projects on Education and Youth Development.
A look at Thai schools today reveals the extent of U.S. influence on the Thai educational system. The American and Thai partnership in providing educational opportunities in northern Thailand began with schooling taught in missionary homes and went on to opening classroom doors for girls, developing medical schools, and instituting exchange programs. Early Americans in northern Thailand who prioritized the creation of schools, followed by later U.S.-supported programs, have left a lasting impact in the field of Thai education.