The mission of the US Army Medical Directorate of the Armed Forces Research Institute of Medical Sciences (USAMD-AFRIMS) is to optimize soldier lethality and mission effectiveness by developing solutions to infectious diseases capability gaps through product development and surveillance research in Asia.

USAMD-AFRIMS resides at the Royal Thai Army Medical Center in Bangkok and is a directorate of the Walter Reed Army Institute of Research (WRAIR) under the US Army Medical Research and Development Command (USAMRDC).

AFRIMS is the largest of a global network of US Defense Department Overseas Medical Research Laboratories—with sister laboratories in Peru, Kenya, Egypt, and the Republics of Georgia and Singapore. USAMD-AFRIMS has nearly 500 staff members (predominantly Thai and US, but including Nepalese, Cambodian and Filipino) and an annual research budget of approximately $30-35 million.

AFRIMS has a rich and successful history developing drugs and vaccines against diseases such as drug resistant malaria, diarrhea and dysentery, dengue, HIV/AIDS, influenza, Japanese Encephalitis, leptospirosis, MERS-CoV, scrub typhus, and other emerging infectious diseases. Endemic throughout Southeast Asia, many of these diseases, also impacting DOD personnel, are referred to as “orphan diseases” since they are often overlooked by the pharmaceutical industry. AFRIMS’ emphasis on orphan diseases thus fulfills a critical global health gap.

AFRIMS has directly contributed to the development and eventual licensure of the Hepatitis A and Japanese Encephalitis Virus vaccines, the development and FDA approval of the Binax-Now point-of-care rapid diagnostic device for malaria, as well as contributed to all FDA approved anti-malaria compounds to include the newest successes in Tafenoquine and IV artesunate in combatting severe malaria.

AFRIMS was the first to discover and characterize resistance of P. falciparum malaria to artemisinin—globally the most widely used malaria drug class. AFRIMS developed the world’s only HIV vaccine that demonstrated the ability to prevent infection in humans, and conducted a landmark study describing how much virus appears in the blood and the onset of illness in patients at the very earliest days of HIV infection. 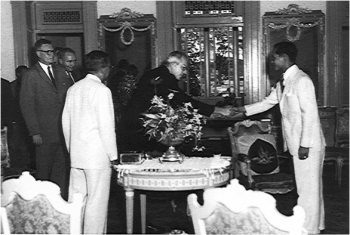 His Majesty King Bhumibol Adulyadej The Great shook hands with Dr. Joseph Smadel in October 1959, leading to the eventual creation of AFRIMS.

AFRIMS has multiple field sites across Thailand, Nepal, Cambodia, and the Republic of the Philippines, with ongoing collaboration in Bhutan, Mongolia, Vietnam, Laos, and Bangladesh.

In today’s world of globalized travel, infectious diseases pose a constantly evolving threat—indiscriminately transcending national, regional, and even intercontinental boundaries. AFRIMS’ unwavering commitment to fight these diseases will help develop the next generation of life-saving medical products for the soldier and the world.