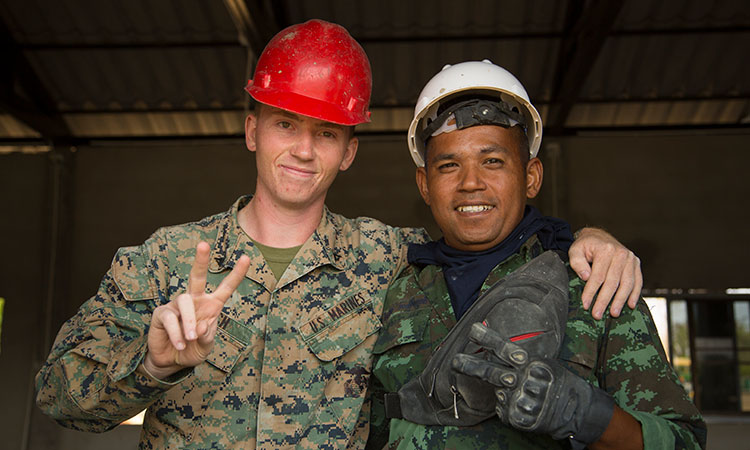 PHITSANULOK, Kingdom of Thailand – Engineers with the Royal Thai and U.S. Armed Forces, along with service members from several other nations, continued construction on multipurpose facilities for seven local schools across the Kingdom of Thailand in support of Exercise Cobra Gold 2020, Feb. 24. Monday marked the start of the fourth consecutive week the multinational force has engaged in humanitarian civic action preceding Cobra Gold 20.

HCA programs are a major focus of Cobra Gold, demonstrating a mutual commitment of Thailand and the U.S. to support security and humanitarian interests of friends and partner nations. These programs are meant to improve the quality of life, as well as the general health and welfare, of civilian residents in the exercise area. This year, HCA programs include engineering civic action projects, community relations events between the local populace and military personnel, and community health engagements.

As the commanding officer for the Combined Joint Civil-Military Operations Task Force, U.S. Marine Col. Mark Cunningham has overseen recent HCA programs in Thailand and has visited various schools to talk with service members and residents in the local community. Cunningham said that the collaboration between nations to work on these projects has exceeded his expectations, and the success has been largely due to the strength of partnership between the U.S. and Thailand.

“We have forged this relationship over many years and our mutual commitment to each other for the 39 years of Cobra Gold is a testament to our long-lasting friendship,” Cunningham said. “It is important to consistently work to strengthen any relationship; the more we partner in times of peace and prosperity and the more we labor side-by-side, the more prepared we will be to support each other in times of crisis.”

Multinational force engineers have been developing new facilities at local schools to replace infrastructure that has grown too old or has been nonexistent. Although actual construction has taken up most of their time, many service members have expressed that engagement with the community has been their favorite part of the exercise. Musical chairs, sack races, tug-of-war, and soccer are only a handful of the games and activities service members participated in with local school children. Members of the local community came out to watch the games and talk to the members of the multinational forces working on the projects.

U.S. Marine Corps Maj. Joel Wellendorf, a civil military operations planner with the 31st Marine Expeditionary Unit, said, “It’s always wonderful to see their smiling faces and to know that we’re well-received in the community and that they see us as partners and friends.” Speaking of the day’s events, Wellendorf added, “I never thought I’d get beaten by a bunch of little kids in tug-of-war, but they came together and kicked our butts.”

Royal Thai Army Maj. Gen. Wutichai Issara, the senior medical officer of the 3rd Army Area, supervised some of the health engagements and expressed a similar view of the importance of the Thai-U.S. partnership to Cunningham.

“We Thais and Americans have a very good, longstanding partnership,” Issara said. “I believe that all medical personnel working in this exercise share the same purpose of doing everything they can to achieve the goals of Cobra Gold.”

Service members from the multinational forces have had a chance to strengthen this bond by working shoulder-to-shoulder for long hours to ensure the safe and successful completion of the engineering civic action projects. The collaboration has proven to be a learning opportunity for many as well.

U.S. Air Force 1st Lt. Eric Daly, with the 347th Engineer Squadron, described his experience building a facility for Wat Dong Khoi School in Phitsanulok as amazing. Daly said, “My favorite part has been working with the Royal Thai Air Force. My counterpart is extremely proficient, knows a lot about engineering, and speaks English very well. We’ve been able to share a lot of methods each of our countries use for construction.”

Construction for all local school sites will be complete by Mar. 5 and dedication ceremonies will take place the same day to commemorate the building of new facilities and the hard work of the multinational force engineers.