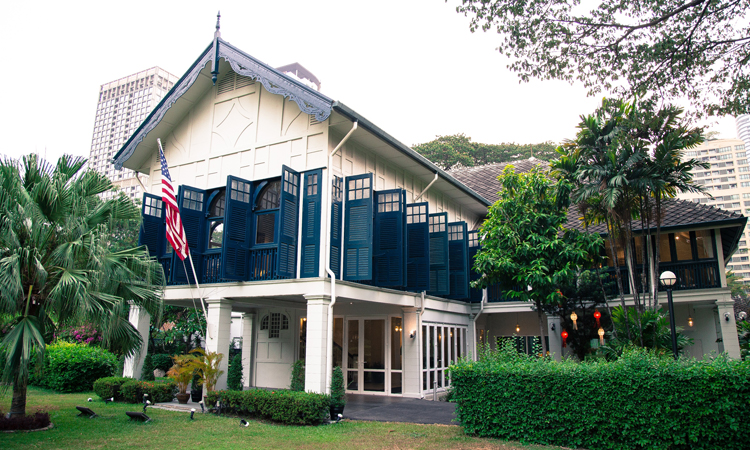 To appreciate the United States Ambassador’s home in Bangkok, with its graceful architecture and lush grounds, one needs to understand the people and events that transformed a rice field distant from the old city to the welcoming home of today. —Written by Paul C. Jorgensen, J.D.

The Undeveloped East of Bangkok

By the late 1800s, the area east of Rattanakosin was filled with verdant rice fields, interlaced with large and small khlongs and dotted by small, scattered farms. Englishman Franklin Hurst proposed to the royal family an unlikely addition to the Bangkok countryside: a club with a horse racing track and a sports field. King Rama V granted a charter to the club in 1901, stipulating the name that it still bears today, the Royal Bangkok Sports Club (RBSC). Meanwhile Sino-Thai entrepreneur Lert Sreshthaputra, also known as Nai Lert, envisioned the miles of fields as residential neighborhoods. To enhance the attractiveness of these tracts, he imported from Brazil and planted hundreds of albiza saman trees, giving the neighborhood a look unlike any other in the city. Dr. Alphonse Poix, a French doctor who acted as royal physician to King Rama V, shared Nai Lert’s vision and erected a stately house on a large piece of land. Today it is now the home of the Netherlands Ambassador.

Personifying Bangkok’s boom growth was English engineer Horatio Victor Bailey. By 1913, Bailey was a well-connected Bangkokian, having worked for Bangkok Dock Company and later as Engineer-In-Chief to the Royal Mint Department. Bailey then founded his own engineering consultancy and an import company. As an RBSC trustee and avid horseman, Bailey was drawn to landscape surrounding the RSBC. Bailey chose a 250 square yard plot near the Poix estate, a place that would afford him ample space to raise horses, and began digging a ring canal and designing his own house.

Bailey sited his house at the back third of the property, in view of but at a discrete distance from the dirt road that inevitably would be developed someday. Walking on a path from the front drive south of the house, Bailey’s prominent bathing sala would come into view, and adjacent to it, Bailey widened and deepened the western and southern border canals to form a large, square bathing pond.

For the main house architecture, Bailey chose a playful combination of European colonial, restrained gingerbread and tropical Malaysian designs, harmonized with Siamese architecture’s elegance, intricacy and neatness. His design was consistent with several other houses built in Bangkok at the time.

The house was built on strong wooden stilts, with living areas above the ground in anticipation of the annual rainy season flooding. The house boasted eaves that extended far from the exterior walls, giving the home protection from Bangkok’s ample sun and rain. Beneath the eaves was an exterior gallery with teak flooring that encircled the house, enclosed only with railings. Bailey designed a veranda to intersect with the gallery around the house and gave the room character with ceiling fans, teak flooring and shutter openings topped by an arcade of “broken” arches. A close look at the false corbel, or wooden base, of each of these arches revealed Bailey’s whimsical side: gargoyle-like carved human faces, facing inward, with both European and Asian features.

Continued prosperity for Bailey seemed guaranteed, but on a solo trip to New York at the age of 40, Bailey died. The circumstances of his death were as unclear and mysterious as the disposition of his estate: he left no funds to his family. By family accounts, Bailey’s widows, unable to maintain the house or staff or to stop arguing about the lack of money, left the property by 1922.

The solicitors leased the Bailey property to the Belgian minister to Siam, Baron de Villenfagne. After four years, the solicitors put the property up for sale. The property caught the eye of the Siam Ministry of Foreign Affairs, who was looking for an official residence for its American advisor, Raymond B. Stevens. After six months of negotiating, the property was sold to the Ministry of Finance for 180,000 ticals (US$5,237 or about $71,000 in 2017 money).

Stevens proved to be the first savior of the estate, much of which had fallen into disrepair and disuse by 1927. Stevens oversaw two months of extensive renovations to the Bailey estate, transforming the grounds by removing the stables, upgrading servants’ quarters, and repairing the bathing sala and pathways. In the main house, Stevens upgraded bathrooms with new septic tanks and flowing water and added a new porch. As a final modern touch, Stevens installed telephones. He lived at the estate until 1935 when he was succeeded by Frederick R. Dolbeare. With a war raging in Europe and increasing tensions in Southeast Asia, Dolbeare resigned in 1940, ending the role of independent American advisors in (now) Thailand, and leaving the house unoccupied.

On December 2, 1941, Japanese troops entered Bangkok. Japanese troops broke into the estate, used the grounds for materiel storage and stuffed the buildings with troops. The main house did not fare well: troops stained the patio tiles with motor oil and scorched the fine teak flooring in the main house with their charcoal cooking braziers. Apparently, in response to shortages, troops also ripped out all the plumbing and electrical wiring from the estate’s buildings. By the end of the war, departing troops left the estate strewn with trucks, gun carriages and tanks, many jutting out of the waters of the canals surrounding the estate. Like many Bangkok buildings at the end of the war, the Wireless estate appeared beyond repair.

Following the end of the war, career Foreign Service Officer Edwin F. Stanton was appointed Minister to Thailand. He and his wife, Josephine, moved into the America Legation quarters at 125 South Sathorn Road, which Mrs. Stanton quickly found had “no comfort, no privacy” and no doors to shut between the living quarters and the offices below.

With State Department’s authorization for the Stantons to rent a “suitable residence,” Mrs. Stanton scoured Bangkok and spotted the old Bailey house. Their initial impression was not good: “sagging…painted chocolate brown, shutters hanging precariously; indeed the whole house listed to one side…the extensive garden crammed with rusted war junk.” But Mrs. Stanton saw promise. Mrs. Stanton immediately called the Thai Ministry of Foreign Affairs, stating that the Stantons were willing to rent the property if the Ministry paid for the repairs. The Ministry agreed.

The Crown Property Bureau (CPB) drew up a two-year, renewable lease dated January 1, 1947. This CPB lease, although modified somewhat through the years, remains in effect today.

Over the next six months, the house’s wiring, plumbing and structural integrity were restored. Floors were resurfaced and walls painted, enhancing the original elements of the house design. The gallery surrounding the house was enclosed, giving the Stanton’s additional living space.

The Stantons moved in and fell in love with 108 Wireless. By April 1947, the American Legation was upgraded to a full Embassy and Minister Stanton became Ambassador Extraordinary and Plenipotentiary Stanton. 108 Wireless became the Chief of Mission’s Residence, or the CMR.

Today, the CMR is maintained continuously by the Ambassador, by the Ambassador’s family and by dedicated Embassy staff. In addition to daily maintenance, the CMR regularly receives fresh paint, new floor finishes and mechanical repairs. The heavy, dark interior walls and blue gallery have been brightened with white paints to match the still stylish overhead fretwork, giving the interior a bright airiness that departs from the original heavier, British masculinity. The rich teak floors, which still bounce ever so slightly underfoot, have been lovingly preserved. The tiled reception area first floor has been completely enclosed with folding glass doors, enabling the space to be cooled and used for large events in hotter months.

For its continuing efforts and success to preserve the CMR, the Embassy was awarded the 1984 Architectural Conservation Award by the Association of Siamese Architects. This care and preservation also allows the CMR to continue as not only as the inviting and refined home of the United States Ambassador, but as a lasting reminder of the people and events associated with the home that have shaped Bangkok.