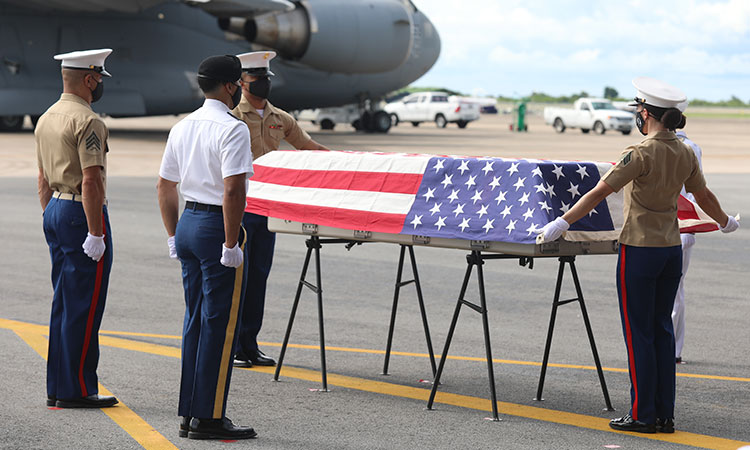 Rayong — The United States repatriated recovered osseous material from the probable crash site of a United States aircraft lost over Lampang Province, 78 years ago during World War Two. The U.S. Defense POW/MIA Accounting Agency (DPAA), which led the excavation mission, hopes that the recovered material and aircraft wreckage will lead to the positive identification of a missing U.S. Service Member, and ultimately provide closure to the family. The recovered material will be transported back to the DPAA Laboratory in Honolulu, Hawaii for further analysis at DPAA’s state of the art facility.

The repatriation ceremony, conducted at the Utapao Royal Thai Navy Airfield, was the culmination of more than 3 years of research and investigation into the circumstances of the lost aircraft and whereabouts of the pilot, and was attended by James L. Wayman, Acting Deputy Chief of Mission at the American Embassy in Thailand, along with Air Chief Marshal (Retired) Sakpinit Phromthep of the Royal Thai Air Force and other members of the American Embassy and Royal Thai Government. If a positive identification is made based on the material collected, the family of the U.S. Service Member will be notified, and they will be given the opportunity to hold a funeral with full military honors.

A/DCM Wayman said: “This repatriation is symbolic of the United States’s enduring commitment to bring home all our lost service members. The success of this mission was made possible by the great cooperation and friendship between the United States and Thailand. On behalf of the United States of America and the American people, I want to express gratitude to the Royal Thai Government, and to the community and people of Baan Mae Kua in Lampang for helping us fulfill our duty and promise to the nation.”

DPAA routinely conducts investigations and recovery efforts across Asia and Europe, supporting efforts to account for more than 82,000 US Service Members who are still missing from conflicts dating back to World War Two. Throughout World War Two, U.S. aircraft of the Flying Tigers, based in southern China, flew reconnaissance and fighter sweep missions over northern Thailand to protect Thai sovereignty.

DPAA’s mission is to provide the fullest possible accounting of U.S. personnel from past conflicts to their families and the nation. The DPAA Laboratory is the largest and most diverse forensic skeletal identification laboratory in the world and is staffed by more than 30 anthropologists, archaeologists and forensic odontologists.

For additional information on the U.S. Defense Department’s mission to account for Americans who went missing while serving our country, visit the DPAA website at www.dpaa.mil , find us on social media at www.facebook.com/dodpaa.