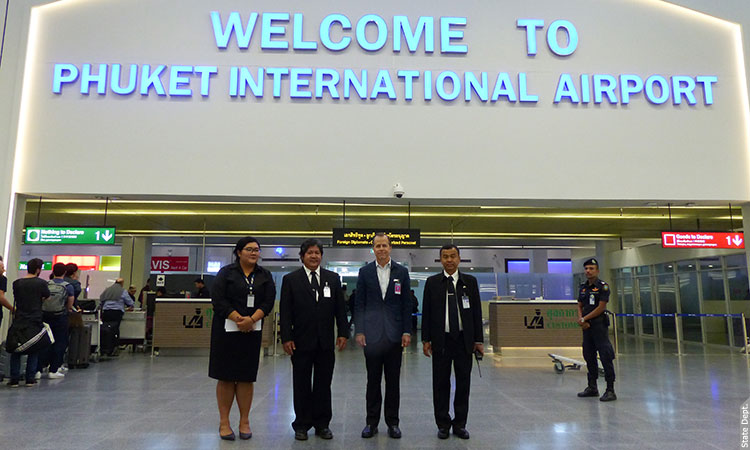 On January 13, Ambassador and Mrs. Davies visited Phuket Province, the largest island in Thailand located on the Andaman Sea coast. The Ambassador and Mrs. Davies began with a tour of Phuket Airport’s new international terminal, where they learned about the tourism industry in Phuket and security measures the airport is taking to protect more than 15 million passengers who arrive in Phuket annually. This was followed by a visit to the Laguna Phuket Kindergarten and lunch at Laguna Phuket resort, where the Ambassador was able to learn about Corporate Social Responsibility activities of Laguna Phuket Resort, as well as meet with local business leaders, tourist police, and American Citizen Wardens to learn about challenges facing Phuket’s tourist industry. Ambassador and Mrs. Davies then toured the Vachira Phuket Hospital to thank the staff for their support of American citizens who are injured or become ill in Phuket Province and also see their Hyperbaric Chamber which is used to treat injuries from diving accidents. Finally, the Ambassador met with Phuket Governor Dr. Chokchai Dej-amornthan to discuss the economic situation in Phuket, including ways to strengthen Phuket’s economy by cooperating with other provinces in the region.