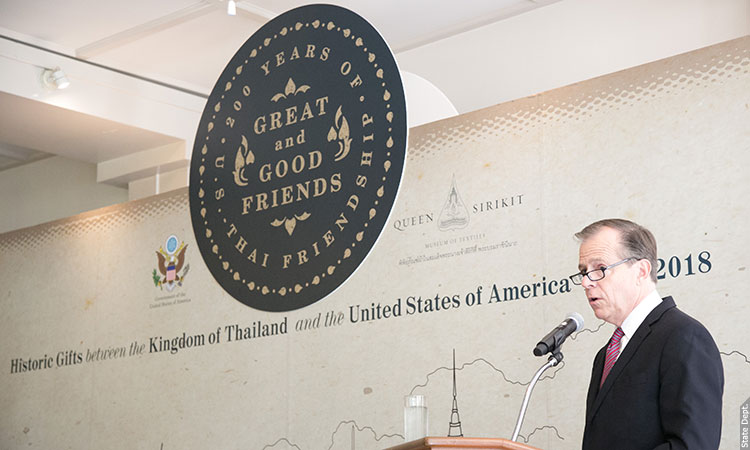 On February 8, U.S. Ambassador Glyn T. Davies announced the launch of “Great and Good Friends,” an exhibition at the Queen Sirikit Museum of Textiles displaying the official gifts exchanged between the two nations at significant moments over the past 200 years.

“The Great and Good Friends exhibit pays tribute to the deep and enduring ties between the people of the United States and Thailand,” said Ambassador Glyn Davies. “Thailand was one of the United States’ earliest friends, and I strongly encourage you to visit the Queen Sirikit Museum and see first-hand how these gifts, over ten generations, helped cement that friendship.”

The exhibition will feature royal gifts from Their Majesties King Bhumibol Adulyadej and Queen Sirikit, King Prajadhipok, King Chulalongkorn, and King Mongkut to and from respective American presidents. Most of these gifts have never been seen by the public, and many will be displayed in Thailand for the first time.

The exhibition represents unprecedented cooperation between leading Thai and American cultural institutions, including contributions from the Smithsonian Institution, the U.S. National Archives and Records Administration and its presidential libraries, the Library of Congress, King Prajadhipok’s Institute, the National Museum Bangkok, the Thai Department of Fine Arts, and the Thai Film Archive.  Only a few of the 79 items that will be included in the exhibition have ever been displayed in public.