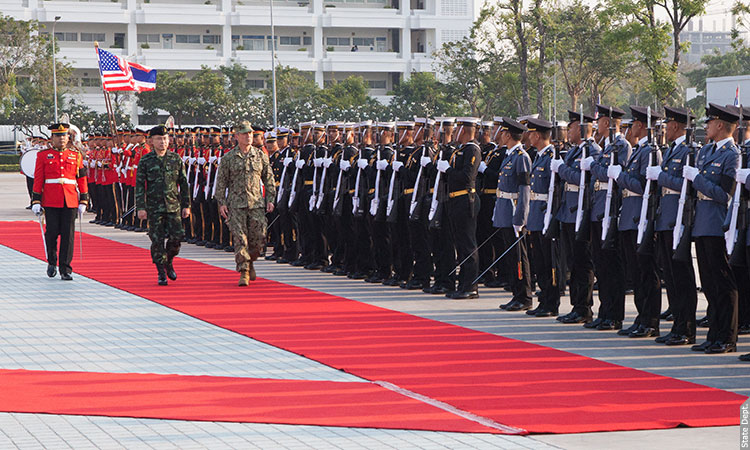 Admiral Harry B. Harris, Jr., Commander of U.S. Pacific Command, Arrived on Monday 13 February to attend the opening ceremony of Cobra Gold 2017. His first stop was to the Grand Palace to pay his condolences to the Royal family and people of Thailand on the passing of King Bhumibol Adulyadej. On 14 February, he received military honors and joined in an office call with his counterpart, Thailand’s Chief of Defense Forces, General Surapong Suwana-adth, who later joined the Admiral and U.S. Ambassador Glyn Davies for the opening of Cobra Gold 2017. In his remarks at the opening ceremony, Admiral Harris again expressed his condolences on the passing of King Bhumibol Adulyadej and thanked General Surapong for hosting such an important training exercise. He stressed that the U.S. alliance with Thailand is a deep and enduring commitment. The Cobra Gold exercise series is an integral part of the U.S. pledge to strengthen our bonds with Thailand and foster multilateral security cooperation across the Indo-Asia-Pacific region. Admiral Harris later met with Prime Minister Prayut Chan-o-cha and Deputy Prime Minister and Minister of Defense Prawit Wongsuwan to discuss the full range of the broad and deep U.S.-Thai security relationship, regional issues, and recent developments in Thailand. Admiral Harris was very impressed by and grateful for the hospitality of the Royal Thai Armed Forces and the Thai people.