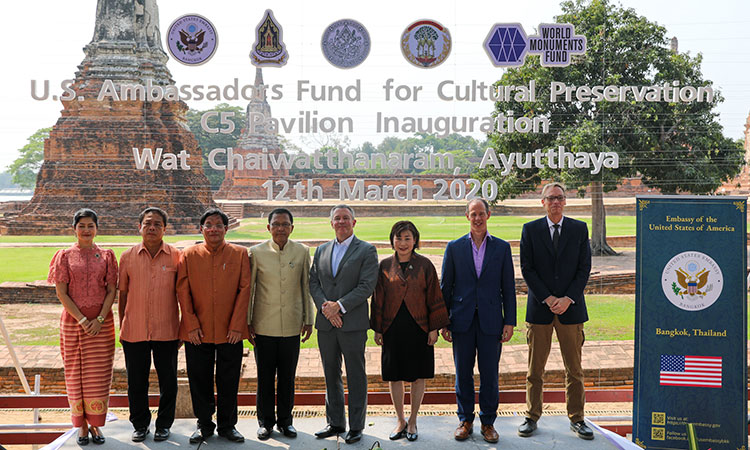 Phra Nakhon Si Ayutthaya — U.S. Ambassador to Thailand Michael George DeSombre joined Deputy Permanent Secretary of the Thai Ministry of Culture Dr. Yupha Taweewattanakitborvon, Governor of Phra Nakhon Si Ayutthaya Panu Yaemsri, and the Ministry of Culture’s Department of Fine Arts Deputy Director-General Aroonsak Kingmanee, for the inauguration of a new phase of the restoration of Wat Chaiwatthanaram in Ayutthaya Historical Park.  The United States Embassy in Thailand has supported ongoing Thai work to restore the temple since 2012 through the Ambassadors Fund for Cultural Preservation (AFCP) under the auspices of the U.S. Department of State.  To date, AFCP has provided over $1.1 million in grant funding for the restoration.  The project aims to develop Wat Chaiwatthanaram as a world-class education destination, teaching visitors about the rich cultural heritage of Thailand.  While touring the site, Ambassador DeSombre said the United States will continue to support cultural heritage preservation throughout the Kingdom.

The restoration of Wat Chaiwatthanaram began in 2011 after major flooding damaged the temple site and endangered its structures. The following year, the U.S. Ambassadors Fund for Cultural Preservation funding was secured, and work began. Thus far, the project has preserved the structures around the temple to prevent any further damage.

Ambassador DeSombre said that by supporting the Thai Government’s efforts to preserve Thailand’s cultural heritage, we show our respect for the Thai people and our desire to help protect Thailand’s unique traditions. Internationally recognized experts have been invited to share their expertise on the restoration and preservation of ancient buildings, while conducting workshops and exchanges for Fine Arts Department personnel.  The project is a model for preservation that can be widely adapted for other Thai historic buildings, while also being a prototype of cooperation for regional cultural preservation.  The United States will continue to work with Thailand in preserving important cultural heritage for future generations to cherish.